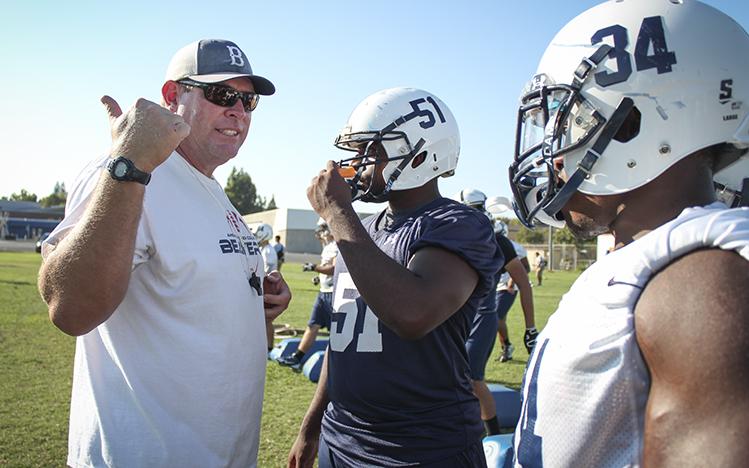 Offensive coordinator and quarterbacks coach Doug Grush was once a football player at American River College in 1988 and 1989. Grush was one of the coaches involved with recruiting now head coach Jon Osterhout. (Photo by Emily K. Rabasto)

For 30 years, Doug Grush has been involved with football, as both a player and a coach.

Grush played at American River College for two years as an offensive lineman, and has had two separate coaching stints at ARC, where he currently serves as the offensive coordinator and quarterbacks coach.

Grush started playing football in 1984. He played for a total of eight years; four years at Mira Loma High School, two years at ARC, and two years at Kansas State.

While playing for ARC, he was named the “Outstand Freshman Offensive Player” in 1988, and was on a 1989 Beavers team that finished with a 9-2 record, ranked top 20 in the nation, and saw Grush named First Team All-State, according to the ARC athletics page.

Following his two years at ARC, Grush transferred to Kansas State, playing there in the 1990 and 1991 seasons.

In 1992, after his second playing season, Grush spent one more year as a student aide coach while completing his degree there.

He didn’t stick around, however, for two reasons: the time commitment, and he missed home.

“I kinda came to a point where I didn’t want to be coaching football so much time that I wasn’t gonna be able to have a family, you know be able to go on vacation. That Division I level of coaching is an extreme amount of time.”

Grush would go on to be the offensive line coach upon his return to ARC, from 1993 until 1995.

“You know I love the game, and you know that ability when you teach a kid something and you see the light bulb go off, you know there’s just nothing like it; it’s really, really cool. And I wrote for the school paper at Kansas State for one semester, I had 20 articles printed, and I liked doing that, but you didn’t get the same feedback,” Grush said.

For Grush, the feedback is key in his desire to coach and teach.

“Once it was out there, you didn’t know if people liked the article, did they hate it, sometimes the people you wrote about, they give you feedback, but there wasn’t that interaction, if that makes sense. With coaching, you get that interaction, good, bad, or indifferent. You’re able to see the kid, and I just kinda got hooked,” Grush added.

When current head football coach Jon Osterhout took over last spring, one of his first moves in organizing his staff was calling Grush.

“He played here and has a vested interest in American River College, he has an extremely high football IQ, very knowledgeable in all phases of the game… You know what he did last year proved to me that he would be able to handle the offense for us moving forward,” said Osterhout.

Osterhout is most impressed with Grush’s work ethic.

“Oh, he’s unbelievable. I mean he’s a worker, he loves football. So when he’s here, he’s very diligent in getting things done, he’s extremely organized, and he’s always a day ahead. And that’s what you look for in an offensive play caller, because when you’re playing, you’re calling plays offensively, you always gotta be a step ahead of the defense,” said Osterhout.

Grush has held multiple positions while coaching, instructing players from a range of age groups.

He was the head coach at Bella Vista High School, the offensive line coach at Casa Roble Fundamental High, as well as his stints at ARC and Kansas State.

Grush says the program at ARC has improved noticeably since his playing days.

“Yeah, I think it’s for the better. It’s much closer to a Division I school than it was when I went here,” he said. “We were good; I mean, my sophomore year in 1989 I think we were 9-2, we finished top 15 in the nation, we were good, but we didn’t have the numbers that AR has now. The locker rooms are better, you know there’s laundry service, the equipment’s better, everything is just a little better.”

In addition to coaching at ARC, Grush is also a P.E. teacher at Bella Vista High School, where he’s taught for almost 20 years.

Grush plans to continue coaching at ARC for the foreseeable future, and will do so “as long as it’s fun and still allows me my family time and things of that nature and doesn’t impede on that, then I’ll do it.”

“And the minute it’s not fun, or I feel I’m not being effective, then I won’t do it anymore,” said Grush.

Be the first to comment on "A Football Lifer: in Commitment and Mindset"