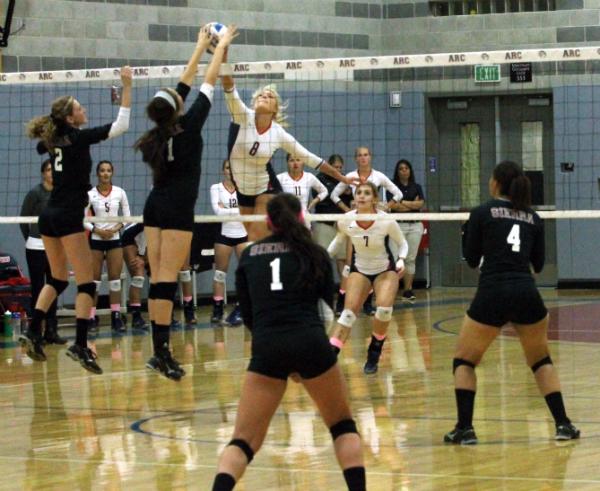 The American River College women’s volleyball team, ranked No. 6 in the state, defeated local rival Sierra College at home Friday Oct. 18. With the win, the team is now 6-0 in conference play.

The Beavers were looking to make a statement against Sierra, who defeated them last year in the playoffs. Freshman outside hitter Erika Jones sent a tweet a day before the match dubbing it the “biggest of the season.”

Fellow freshman Taylor Bunger took note of the added incentive as well. Having not been with the team last season, the unique atmosphere in the locker room caught Bunger’s attention and helped her achieve a higher level of focus.

“(The build-up) was huge,” She said. “I could tell (my teammates) had a lot of fire and really wanted to beat Sierra, I tried to feed off that.”

That focus translated to success early in the match. After a 6-to-6 tie, the Beavers went on a 9-3 run, including one sequence in which the team recorded three consecutive blocks to create separation that Sierra would not overcome.

The second set would prove more challenging, as Sierra shifted the momentum and took a 5-to-9 lead.

After taking a timeout, ARC made a 3-1 run, eventually cutting the lead to 2, but was unable to fully recover, dropping the second set 18-to-25

“When we win a (set) we get excited, and let down in the next.” said sophomore middle hitter Nicole Hareland. “We think ‘Oh, cool, we won a (set) so we can relax.’ That’s our biggest problem.”

Following the letdown in the second set, the Beavers jumped out to a 3-to-1 lead early in the third and maintained the momentum.

Hareland and sophomore outside hitter Lauren Kirschke controlled the net throughout, leading the team to a 16-to-6 lead that would not dip back into single digits through the rest of the set.

Sierra showed some resilience in the fourth set, taking a 6-to-2 lead and forcing ARC to call for time.

The Beavers regrouped after the timeout, quickly pulling within two and eventually tying the game at 11.

Hareland and Kirschke continued to dominate, at one point the duo produced three straight kills to give ARC the  lead in the set.

Sophomore setter Jessica Condit was crucial to the success of the Beavers down the stretch, setting up Hareland and Kirschke for several kills, including one to put the team up 23-to-21, rattling Sierra to the point of no recovery in the final set of the match.

“We’ve always had a good connection,” Hareland said of her rapport with Condit. “Her sharing captain with me really helps (our chemistry). When she’s feeling it, I’m feeling it.”

Condit echoed similar sentiments in regards to her confidence in setting up the sophomore duo.

With the defeat of a rival behind them, the team is now looking to continue dominance in conference play, and working to build more consistency through matches.

“We’re not as consistent as we’d like to be right now,” Said Condit shortly after the match. “We’re an easily distracted team. If one person misses their pass, then somebody misses their hit… we have to focus (more) on that.”

ARC sports coaches have athletic pasts of their own

Be the first to comment on "Set Up to Win"