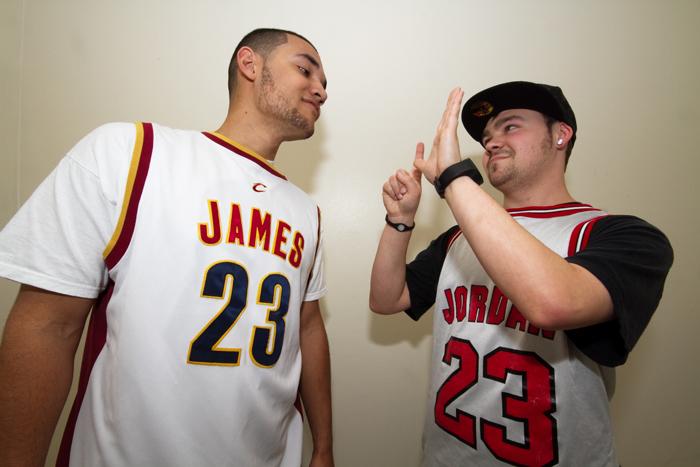 Michael Jordan will go down in history as one of the greatest basketball players of all time. Mainly because his career was filled with back to back championships, multiple MVP honors, and defensive team awards. Although it seems like Jordan did everything, it was thanks to his team that they went that far, which is why many of his former teammates are still in envy of him for not receiving enough credit. What people fail to realize when comparing Jordan and Lebron James is the era in which they played. Jordan played in an era where some players still needed to look down when they dribbled, ball handling and crossovers were new, and the slam dunk was a big deal. In Lebron’s time, these things are simple for most high school players where skills are developed much earlier than in the past. This is why I believe critics can’t simply throw out the multiple awards in defense of Jordan when the competition and skill level of other players were so much lower.

If anyone besides these two players would have the right to say something about the argument, it would be Scottie Pippen. Michael Jordan’s right hand man for all six championships. He said on a radio talk show that Jordan was probably the best scorer, but Lebron was the more complete player. He pointed out how Lebron is so potent on offense, while at the same time keeping his team involved. Also, defensively he shoots the gaps and creates many transition opportunities where he’s almost unstoppable. These are real points he’s making, and who he is should hold a lot of ground in this argument. With all things aside, and just looking at them side by side, player to player, Lebron beats Jordan in almost every category. He’s taller, faster, and stronger than Jordan was. He’s more explosive, and finishes stronger than Jordan did. He plays the point guard position and draws so much attention that he’s able to create opportunities for all the players on the court, giving his team a better chance to win. The one thing Jordan does have over Lebron was his jump shot. Comparing highlights between the two, you’ll see Jordan slithering his way out of double teams for tough jump shots, or sneaking in a dunk here and there. While Lebrons highlights consist of powering through three players and dunking on a big man. Or chasing down guards for amazing blocks. Or showing incredible help defense. That’s why Lebron James is more of a complete player than Jordan was, and the more complete and dominant player is the better player.

Sure, Michael Jordan has numerous awards and achievements, and helped popularize the NBA globally, but these Finals MVPs are the most telling.  If you capture Finals MVP honors, it not only means you won the championship (the exception being Jerry West in 1969), but it means you are the reason your team won.

LeBron James has taken a trip to the Finals only twice in his nine-year NBA career, and lost both times. He was the opposite of a Finals MVP; he was the reason his teams lost. In Jordan’s ninth season, he was already on his way to winning his third championship.

The evidence is in the statistics.  In his first Finals appearance, MJ averaged a superb 31.2 points, 6.6 rebounds, and 11.4 assists per game.  James averaged 22 points, 7 rebounds, and 6.8 assists.  So maybe James had some first time jitters.

Jordan’s stats are even more legendary considering his competition.  Magic Johnson, Larry Bird, Clyde Drexler, Charles Barkley, and Dominique Wilkins, just to name a few.  Not saying James’ competition won’t be in the Hall of Fame, but when two of those players happen to be on your team, your rival pool becomes a little weaker.  Sure, MJ teamed up with Johnson and Bird, but it was called the Dream Team, and at least they actually won.

There is really no comparison when talking about Jordan and James. They were both extremely athletic as younger players, but what worries me about James is that he relies too much on his athletic ability.  When Jordan’s athleticism started to decline, he still had his fade-away shot and high basketball IQ to dominate the game.  I don’t even see a consistent jumper for James yet, and he’s going to need it to compete in the NBA after he turns 30.

‘To Kill a Mockingbird’ showcases racial tention of the 1930s

In our heads – Josh Baumbach

Be the first to comment on "Who is better? LeBron James or Michael Jordan?"