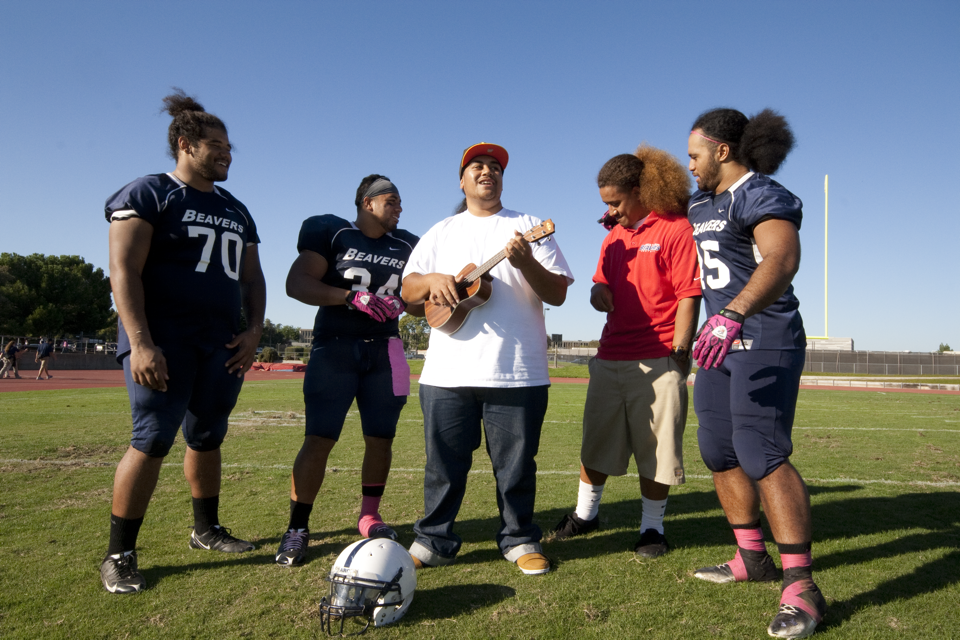 "Frank and the Tanks" from left to right, Jake Sullivan, Justin Lata, Frank Toele, Sefa Fatu and Samson Failfili sing a melody on the field at Beaver Stadium on Saturday, Oct. 8. (Photo by Bryce Fraser)

If you happen to be near the ARC pool and head football coach Jerry Haflich‘s office around lunchtime, you’re likely to hear the soothing sounds of “Frank and the Tanks.” You can watch and listen as they hand off ukuleles around the group taking turns strumming and singing.

Frank “The Tank” Toele, a freshman at ARC and maestro to the ARC football team, has inspired running backs, wide receivers, offensive and defensive linemen to play his ukuleles.
“I think I’ve taught about 10 of us … probably over 10,” Toele said.

Toele attended Grant High School, along with his brothers and friend, Antonio Bumpers. Toele said he spends a lot of time “hangin’ with the team” because so many of his fellow music-lovers all play for the Beavers.

Bumpers said Toele is “very versatile and very soulful.” Others say he is friendly and relaxed.

Toele hasn’t had any musical training, and no one in his family plays, but says that the ukulele was “just something I picked up.”

A small guitar-like instrument, the ukulele is most commonly associated with Hawaiian music. The ukulele comes in four sizes, the largest, a baritone, looks quite similar to a standard guitar. The culture of the instrument has reached far from the islands, including appearances in major motion pictures and in Pearl Jam’s front man Eddie Vedder’s solo album released in May titled “Ukulele Songs.”

The group of students comes from a wide variety of cultures and most of them have only been attending ARC for one or two semesters. Lata is from Harbor, a small community near Los Angeles and Faifili went to high school in West Valley, Utah.

The rest are all from the greater Sacramento area. They haven’t known each other long, but seem to have built a strong bond. On game days they gather to play the ukuleles and sing to lower their stress levels before a game.

Excelling on the ukulele before games may be paying off for two players in particular. Faifili is second on the team with 31 tackles and leads the Beavers with four sacks this season. Benson, a sophomore from Granite Bay, has contributed as well with 20 tackles and two sacks, despite missing one game with a foot injury.

Haflich has even joined in as a fan of the diversity these players bring to the team.

“It’s awesome. I love the different cultures, how they clash, and mold, and mend together,” Haflich said.

Every athlete has a certain way they prepare for a game, whether it be listening to music, putting on a specific pair of socks, or getting into a circle and playing the ukulele.

“It‘s neat to see them relax and enjoy. Everybody has a different way of preparing for any kind of contest,” Haflich said. “They are fun to have around.”

Major decisions: the highest-growing fields of study for ARC students

Be the first to comment on "Ukulele-playing football players can be spotted around campus, leaving a trail of island sounds behind them"