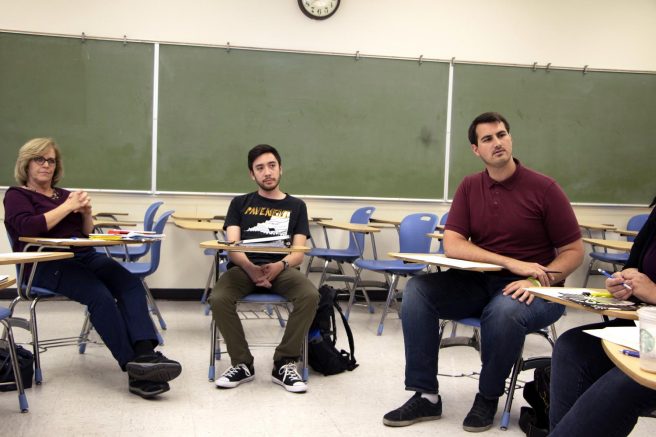 Professor Margaret (Peg) Scott, Eric Bair and Michael Gates listen as the president of NAMI on Campus speaks about planning an upcoming College Hour, in Davies Hall on Oct. 4, 2018. (Photo by Christian Sutton)

The American Psychological Association reports that as of 2013, 95 percent of college counseling center directors say the number of students with significant psychological problems is a growing concern.

The National Alliance for Mental Illness chapter at American River College and the Life is Worth the Walk club will come together to host a college hour on Oct. 18, from 12:15 to 1:15 p.m. in Raef Hall 160.

The college hour event will debut a new website, which will encompass all the mental health resources geared to college students, according to Jeffrey Vandervort, a cognitive science major and club president of NAMI on Campus.

Peg Scott, professor of psychology at ARC and advisor for NAMI on Campus, said she hopes to have students, clubs, staff and faculty come to the debut of the community resource created by the Design Hub and LWW.

“We will get input [from students] and help to get all community resources to join together,” Scott said.

According to a status report on the convergence of the resources from Scott, LWW advocates in many ways including on-campus activities, wellness days and additional presentations. The two clubs were spread too thin and were not able to establish a mental health support group on campus.

“There was a tremendous outpouring of support from the campus community. LWW and NAMI – ARC are now structured such that LWW will remain working on and then marketing the resource website and will continue its legislative efforts,” Scott’s report said.

Some of the information will include resources for homeless students and student families and updates on the food bank, according to Vandervort.

“Students will see that there is a greater community out there that is trying to help people outside of their own smaller communities,” Vandervort said.

Students are urged to “LinkIn” at college hour

Life coach to host series on stress, nutrition at ARC