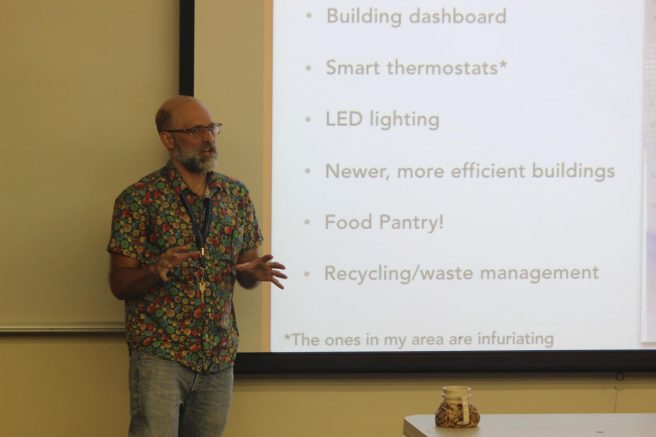 Geology Professor Glenn Jaecks delivers a speech on climate change during a college hour on Nov. 16. (Photo by John Ennis)

On Nov. 16, geology professor Glenn Jaecks gave a lecture during college hour about adapting locally and regionally to the effects of climate change, as well as what we can do to minimize its impact on campus.

Jaecks claims that it is too late to stop climate change, but that we can mitigate it through adaptation.

Jaecks made the point that as individuals, changing to more energy efficient utilities is no longer sufficient, and that we need to act collectively on the issue of climate change, including by having a plan to combat climate change at American River College..

Currently, California and the city of Sacramento have climate action plans, as well as many colleges across the country, according to Jaecks.

Jaecks showed a slide during his lecture with a list of suggestions for ARC including reducing greenhouse gas emissions, better managed of food waste, improving commuting infrastructure and flood mitigation.

“We want to go all renewable by 2045, the City of Sacramento has a climate action plan. A lot of it has to do with improving infrastructure,” Jaecks said.

“Student government, faculty and staff have to find a way of implementing these sorts of things and making them central, not an afterthought,” Jaecks said.