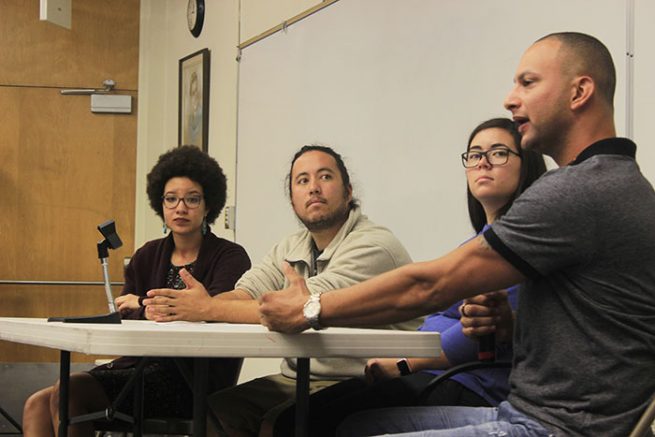 ARC students, left to right, Kinu Manabe, Jason Parsley, Whitney Butler and Jeremy Clodfelter, speak about what it is like being multi racial at the college hour on Thursday. (Photo by Cheyenne Drury)

A group of panelists, all of mixed races, opened up about their experiences of being interracial in Sacramento at ARC on Thursday.

Every semester, the faculty members that orchestrate the weekly college hours try to find a theme.

This semester’s theme was diversity. Being able to respect and understand other groups of people was the mission for the weekly college hours.

Sacramento is a diverse area and home to people of several religions, races and ethnicities.

“(Sacramento) is a very diverse area, but the question of ‘what are you?’ comes out like, ‘oh you’re different, tell me why,’” said ARC student Jacob Parsley, who is Asian and white.

Being a person of mixed race, you often feel like the odd one out because you’re not sure which group you belong to.

“My parents wanted me to know that I am beautiful,” said ARC student Kinu Manabe.

When a person asks a individual of mixed race “what are you?”, the question usually has no ill intentions, but can be perceived as the individual being different or the odd one out.

“I get this question a lot from the Asian community and I sometimes I get this look of disappointment when I’m not what they are … This is saddening to me,” said Parsley.

Terms such as “mulatto” usually shortened to “mutt” was used frequently, primarily from the previous generation, to describe someone of mixed race.

“I’m an uber driver and once someone got in my car and called me a mutt and asked me what am I. That made me very uncomfortable … it’s not meant to be insulting but it is,” said Parsley.

This term is slowly disappearing because of how offensive it is.

“Because I’m Asian I get that ‘well what kind of Asian are you’ or ‘is your mom the Asian one?’ which sexualizes me and my race,” said Sacramento State student Whitney Butler.

But, is it just minorities that receive those inquisitive questions about their ethnicities?

“In my feminist composition class, this Caucasian girl said she had never been asked what her ethnicity was. This blew me away because I’d been asked this my whole life,” said Butler.

The amount of diversity that Sacramento embodies usually makes for an understanding and accepting environment compared to other places.

“From being a multiracial person and living in Sacramento, it is very diverse. I’ve only been asked twice (in Sacramento) what ethnicity I am … I’m from North Carolina it’s not like that at all there,” said ARC student Jeremy Clodfelter.

Being surrounded by people who look like you can be very helpful, especially at a young age, because you’re exposing yourself to people who understand what you’re going through.

Stereotypes have negative effects on minorities, even when the stereotype seems to be a “good” one.

“With being half Asian we get that stereotype that we have to be good at academics. People expect me to be going to Harvard and having straight A’s … That makes me feel like I’m not succeeding,” said Butler.

Assuming that all minorities are the same because of the behaviors of some limits what minorities think they are capable of.

“We shouldn’t put minorities in boxes. My ethnicity is who I am but it is a small part of who I am,”  said Butler.

But when a person’s belongs to two cultures must they identify with only one or if they’re only defending one culture, does that mean they’re ignoring the other?

“I would always feel obligated to defend my Asian heritage even though I didn’t know anything about it because I didn’t have that side of my family to teach me,” said Parsley.

Being cognizant and respectful when asking a person about their culture is very important.

“As long as they’re respectful when asking about my culture. I don’t have a problem telling them about my ethnicity. I’m not ‘exotic,’ I’m a person who is existing,” said Manabe.

1 Comment on "Mixed race students open up about their experiences"