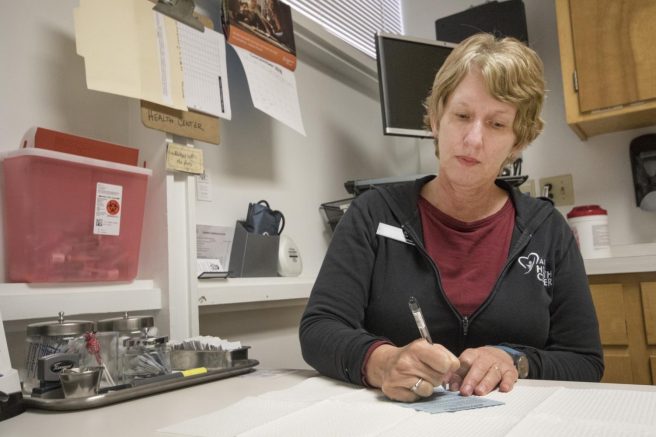 Nurse Pam Whipple writes notes after student appointments in one of the consultation rooms in the Health Center at American River College on Dec. 10, 2018. (Photo illustration by Ashley Hayes-Stone)

On Oct. 22, the Los Rios Community College District announced the implementation of a new mandatory $20 health services fee due at registration each semester across all four colleges, beginning in spring 2019. This fee will fund new and expanded services that will be available to all enrolled students.

The spring 2019 semester will bring the starting stages of an expansion of health services at Los Rios campuses, though the full range of additions and improvements are not expected until fall 2019, according to an email sent to students from LRCCD through eServices on Oct. 22. The fee will not be applied during the summer term.

This is the first time a health services fee has been applied in the Los Rios district.

While the specific plans for health services have yet to be determined, the health fee will fund services for “physical health, mental health, and wellness and preventive care,” according to the LRCCD email. The implementation of these services will be based on each individual college’s needs, “but the supports for students will generally be similar across the district.”

Though it is a mandatory fee, some students will be eligible for a health services fee waiver, including certain Board of Governors fee waiver recipients, and students in apprenticeship programs.

ARC sent an email to students through eServices on Dec. 5 with a link to a survey regarding the expanded health and wellness services.

Pam Whipple, a nurse in American River College’s Health Center, discussed growth of services and challenges that ARC’s health services fee project team will face with the implementation of the fee.

“Generally, I think it’s a good idea, but with the fee and increased expectations there will also be some growing pains. Expanding services involves complex facilities, staffing and licensure issues,” she wrote in an email to the Current. “It’s going to take some time to implement, and ARC has a Project Team in place to begin this work.”

Parrish Geary, ARC’s dean of admissions, is leading the Health Services Fee Committee at ARC, and spoke to the Current about plans for the fee.

Mental health services are the only expanded service confirmed for ARC’s spring semester, according to Geary, and will be provided in part by outside organizations. Other types of services will be added by fall 2019.

“American River College is looking to initially work with WellSpace for mental health services,” he wrote in an email to the Current.

The full range of mental health services to be offered is not clear yet, but Geary confirmed that students will have access to a mental health professional.

“It all depends on what the student presents. However, I can say addressing depression and anxiety will be part of the services,” Geary wrote. “A therapist will be available.”

Currently, health and wellness awareness and resources, including those for mental health, are promoted through various events and booths on campus. There is also a peer mentor mental health support group on campus hosted by the National Alliance on Mental Illness (NAMI on Campus) club.

The regular services for students and staff at the Health Center currently include tuberculosis testing, various specialty referrals, and at least four types of vaccinations. Aside from a limited supply of free flu shots, all of these are accompanied by a fee, according to Whipple.

Condoms, menstruation products and limited first aid are also available for free. There is information about local resources available at the center as well. 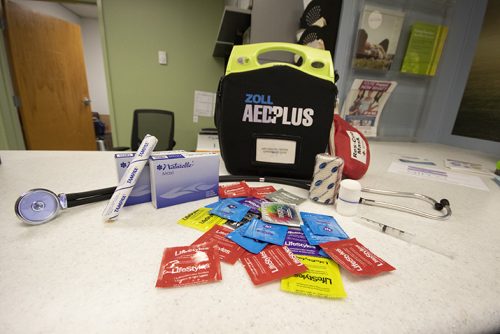 Despite the resources and aid currently provided by the Health Center, many students do not know of its existence, though this will improve, according to Whipple.

“Generally, I don’t think students are aware of our presence and services unless they are referred by an employee, and sometimes by another student,” Whipple said. “The health fee should help to improve that.”

While ARC’s webpage related to Health Services is full of information and external websites, it has dense text, and there is no mention of sexual or reproductive health on the front page — a vital service to young college students. These resources may improve with the fee.

In the recent past, ARC offered STD checks, pap smears and pregnancy tests, among other health services through Women’s Health Specialists, a Sacramento-based feminist and LGBTQ+ inclusive clinic that worked with three of the Los Rios district colleges.

After being at ARC for less than two years, the services offered on campus were decreased after Women’s Health Specialists closed in 2017.

Ryan Nix, the health services assistant, said the Health Center uses its own budget for menstrual hygiene products now, though the quantity is running low, and they are not available in the dispensers in bathrooms across campus.

“What I’ve heard, is because of vandalism; those (dispensers) were being broken into, so that was a service that was discontinued,” Nix said. “They are available here in the Health Center. They are free to staff and students.”

Designated lactation spaces on campus are also provided as a part of health services at ARC, including one in the center itself. However, many of these spaces are in need of upkeep, which was addressed when the past Joint Budget Committee approved a bill to allocate $2,000 to the renovation of the lactation rooms, though the rooms have not received supplies yet. 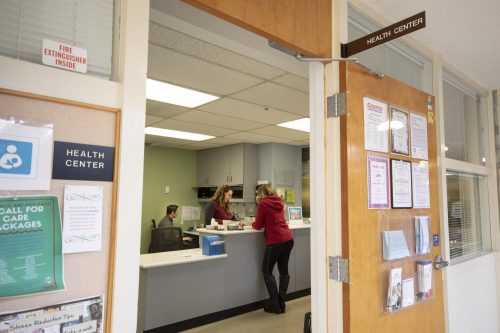 Some of the lactation rooms are multipurpose and uninviting, according to Kathleen Fox, the chair of the Human Lactation department. She said that while she appreciates the addition of a space in the Student Center, she hopes that the rooms are maintained and that students are able to find information about them.

“I believe there would be greater utilization and demand if the availability of these rooms were common knowledge,” Fox wrote in an email to the Current.

Elena DeNecochea, Vice President of the Student Senate and president of the Feminists United Club, has rallied for sexual health services to be brought back to ARC for over a year. The club was able to get around 200 student signatures at a Club Day booth last semester in support of the services.

In the email, LRCCD wrote that the need for an increase of health services was brought to the district’s attention by student groups.

“We are incredibly appreciative of the student leaders who championed this effort and advocated for additional resources to meet student needs,” the email read.

As a student leader who has been advocating for an increase in health services, DeNecochea says she is still worried about the information Los Rios has released so far in the email.

“Physical (health) is not the same as reproductive (health), those are two very different things so I think it’s fancy wording that keeps us out of getting our reproductive services,” DeNecochea said. “I really do feel that we have to stress that those are the services we want brought back.”

Implementation of sexual health services has already begun at two other Los Rios campuses; since the announcement of the new health fee, starting in November Sacramento City and Cosumnes River College have offered free STD checks and treatments to students. These services are provided by an outside resource and are available due to the higher headcounts at those campuses, according to DeNecochea.

According to an Oct. 28 article published by the Sacramento Bee, the new sexual health services at Cosumnes River and Sacramento City College are funded by the county and are open to all Los Rios students regardless of which campus they attend.

“The Sacramento County Board of Supervisors recently approved a $25,000 grant to pay for a nurse to work twice a week at the health centers … to offer free screenings and treatments for sexually transmitted infections, including chlamydia, syphilis, gonorrhea and HIV,” according to the Sac Bee article.

DeNecochea says she hopes that bringing a bill to the Los Rios Board of Trustees through Student Senate will help ensure those services are brought to ARC, as well as Folsom Lake College.

“I’m going try to get all four schools to basically all vote ‘yes’ on this resolution and say we want the reproductive services specifically for all four (LRCCD) colleges,” she said. “I’m hoping that I can get the president of each Los Rios college … to pass this (resolution) in to motion.”

Despite the community’s interest, the committee did not directly confirm that reproductive health services would be brought back any time soon.

“The charges will cover all services offered in the Health Center. We are currently researching various ways to implement reproductive health services at ARC,” Geary wrote.

Nix said the center is open to getting reproductive health services back, though it seems likely that the inclusion of those services will be at a much later date.

“There is very limited information on a lot of things. I can tell you right now that there’s no plans in the works immediately to get another reproductive health provider in the Health Center. Not that I know of,” Nix said. “Again, maybe the health fee can help out with that, kind of too early to tell.”