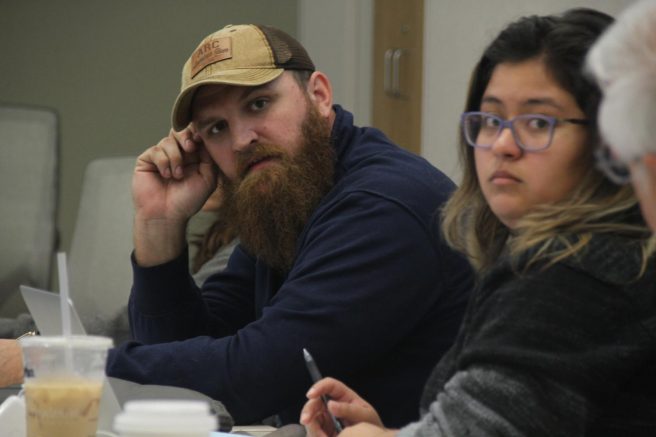 A previous version of this story incorrectly stated that the AED Accessibility bill was being dropped. Also a previous cutline Earl Crouchley III and Deborah Hernandez as senators

A decision to drop two resolutions, along with discussions about ASB elections and the incoming administration, were the main talking points from Friday’s Associated Student Body Student Senate meeting.

With three pending resolutions on the table for discussion and only three meetings left in the semester, ASB president Deborah Hernandez recommended the resolutions be dropped.

“Seeing as we only have four meetings left — including this one —  it is my recommendation that this board just closes everything out,” Hernandez said. “We’ve had from last semester, to this semester to move things forward, but there’s just not enough time.”

Senator Mahmoud Abduljabbar argued that one of the resolutions, calling for additional student translators, should kept alive because it is close to being ready.

“We’re almost done, we’re just waiting on some numbers,” Abduljabbar said. “Since we don’t have any numbers we’re gonna have to change [the wording of the resolution] up a bit.”

When put to a vote, the board voted 3-2 to keep the resolution alive. Another resolution regarding AED Accessibility was also kept alive with a deadline for April 13. One bill involving service animal training on campus was dropped.

Other business included discussion on a resolution in progress would give future senate and CAEB members two days of training with parliamentarians, who would go over the process of student senate and the Brown Act.

Other district-wide benefits such as a free parking pass for ASB and CAEB officials, transcript notation, and priority registration were also proposed for future senate members.

The final talking point came from a new district-wide regulation regarding consensual relationships between a district employee and someone who they may have influence over, whether they are employed now or in the future.

Some senate members found the wording of the regulation to be “iffy” with Vice President Earl Crouchley III calling the future clause “bogus.”

A vote to recommend the removal of the expanded definition was defeated by a 3-2 vote.

1 Comment on "ASB drops resolutions and prepares for new term"