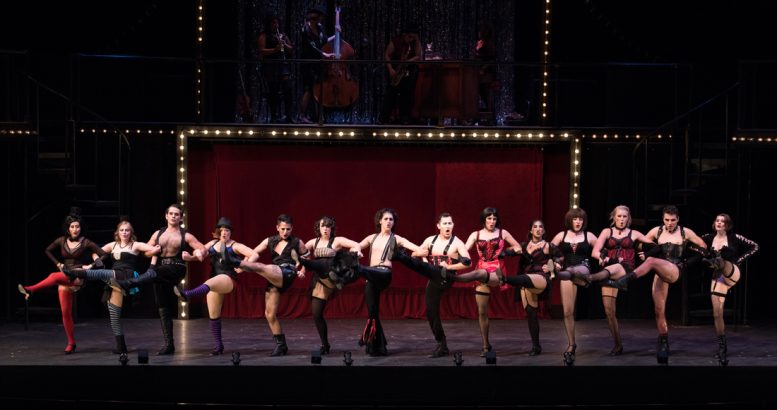 The “Cabaret” theater production is selected to perform at top regional competition on Feb. 19-25. (photo curtesy of the Theater Department)

The American River College theater production of “Cabaret” has been selected to perform at a top regional competition in Denver, Colorado February 19-25.

The college’s production of “Cabaret” is one of three shows in its region that’s been selected to compete among 24 other shows at Kennedy Center American College Theater Festival.

“Cabaret” had a three-week run at ARC last semester in October. The play is about a “burlesque” show set in 1920s in Germany during the rise of Hitler, when people were attempting to escape the political disturbances happening around them by losing themselves in sex, alcohol, and drugs.

The cast is preparing two shows for the regional competition, during which it will be judged on its performance, acting, directing, and musical aspects. They will also have the opportunity to compete for awards and scholarships.

“We’re going to be under the scrutiny of a ton of people in the industry– the theater industry, not just students and community members, but professionals from all the different colleges and universities,” said Emmanuel Jimenez, a dancer in the show.

The shows cast members expressed their excitement for the opportunity to perform and compete among universities, as a small community.

“Most of the shows that go to ACTF are usually four-year university shows who have the money, the better acting programs [and] the better actors,” said Jimenez.

Each year, the semi-national competitions at ACTF have hundreds of students performing to compete for scholarships to potentially make it to the national level in Washington D.C., which takes place later in April.

“ARC hasn’t had an opportunity like this since 1997, and so it’s really a huge honor,” said Jimenez. “Our show had a lot of upward mobility and potential – we didn’t expect it to get the acclaim that it received from the community when it was performing here in October.”

The cast will be performing two public shows at the ARC Theater to raise funds for the trip expenses, which are also the shows they will perform in the national competitions.

The first show will be an “Evening of Scenes” where those competing for acting, directing, and musical theater scholarships at ACTF will present their individual performances. The other show will be the “Cabaret Gala,” a condensed version of “Cabaret.”

“We’ve been spending the last few months converting the play into a traveling show,” said Jimenez. “We still have the same production, pretty much, and we’ve adjusted the set to all be easily broken down and reassembled.”

The amount needed to cover the entire production — the cast, technical staff, faux orchestra, registration, airfare, lodging and trucking will amount to approximately $54,000, according to ARC’s theater department website.

The production cast will also need to bring along its whole set: their costumes, props, microphone system, stage management team, lights, tools, as well as the director and choreographers, which add to the expense.

“Right now, the dean of the Fine Arts division is trying to see if the administration from the college will help fund this huge [trip] because it’s costing us students a lot of money to make it happen,” Jimenez said. “We’re all out there selling tickets to our show.”

The theater production will have to pay for its own plane tickets to Denver, according to Itzin Alpizar, who plays in the “faux” orchestra for the production.

The funds they are raising will help pay for the rest of the trip.

Alsizar explained that the main orchestra for the production, which has 20 members, was too expensive to take to Denver; a smaller “faux” orchestra is taking their place for the trip.

Annelies Veldman, who is also part of the production, has been acting for eight years since high school and has attended the ACTF competition three times in the past.

“It’s really cool to be able to say we can do this show that all of us put so much heart into again in our own theater and then take it halfway across the country…it’s really surreal,” Veldman said.

To support their trip, students and guests can attend performances that will be held at the main ARC theater. “Evening of the Scenes,” will be performed Feb.10 at 7:30 p.m. Tickets are $10.

The “Cabaret Gala” will be held Feb. 17. at 7:30 p.m. Tickets are $20 for guests, $12 for students.
To make donations and for more information, visit the ARC “arts events” page at www.arc.losrios.edu/artsevents.

Be the first to comment on "“Cabaret” selected to present at top regional competition!"