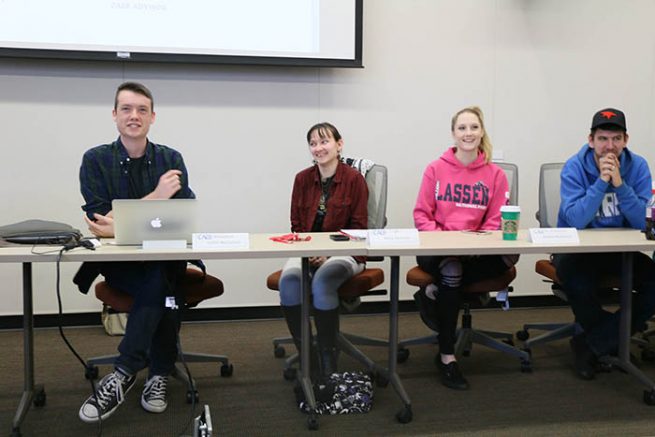 The Clubs and Events Board (CAEB) briefly discussed the activities for the upcoming Club Day on Nov. 17. Other topics were discussed such as a club contest game that involves collecting cans and coats for points.

“We want to facilitate a sort of game of ‘canstruction’ where people bring in as many cans as they can and try to build the best thing they got out of non-perishable food items,” Nicholson said.

The teams would earn three or five points for coats and one for cans.

“The idea is that we are going to be harvesting resources for our homeless or underprivileged students. So we can provide some sort of resource to see them survive through the winter,” Nicholson said.

With the help of his sister, director of activities Ashlee Nicholson, Justin Nicholson threw out an idea for a ring toss game.

“Ashlee and I are going to grab bottles of glass to use,” Nicholson said.

“It’s too much to do by ourselves so we need your help,” Nicholson said.

Director of finance Bryan Stalker said that “it’s going to leave us out in the rain so to speak,” when club games where being discussed.

Sigma Phi Sigma club president Chantelle Willis said she would provide assistance for club day as well as the club contest of coats and cans.

The NaNoWriMo is a bill called Pre-Pharmacy Club Grant Bill which would provide $100 towards pharmacy campuses.

The bill was passed 12-0 with no objections.

Be the first to comment on "CAEB club contest helps homeless, Club Day on the way"