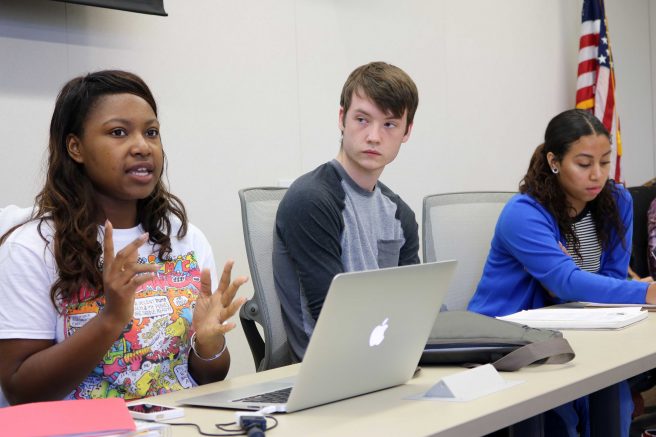 The student senate of American River College discussed ways to create a student-led food pantry to deal with the issue of food insecurity among students on campus at Thursday’s meeting.

The pantry would be supported by donations, and in order to gain interest in the project and to make it sustainable, Advisor Juan Blanco offered to alter his appearance if certain donation goals are met.

Senate President Scott and Clubs and Events Board President Nicholson brainstormed other donation drive ideas such as getting clubs and faculty involved, a canned food drive, a fun run and partnering with the ARC Foundation to procure funding.

There’s something more shameful in the fact that there’s a system that doesn’t allow students to have the food that they need in order to sustain themselves physically and mentally in order to learn,” Scott said. “There’s nothing shameful about not being able to get food and so we really need to figure out a way to combat that on campus.”

Privacy for students in need of access to the pantry is expected to be addressed by the board as plans progress, although nothing has been finalized.

Earlier in the meeting the student senate added a new member to the board. Lloyd Guzman was sworn in by Scott.

Standing before his fellow senators, Guzman raised his right hand and repeated after Scott an oath to uphold district policies and regulations as well as Associated Student Body (ASB) Constitution and student senate bylaws.

Similar to Guzman’s appointment last week, Scott introduced another new Senate hopeful to the board, Yasmeen Baxter, who was subsequently appointed to a chair on the board after brief discussion.

Before her appointment, Baxter was asked by Clubs and Events Board (CAEB) President Justin Nicholson if she had any experience with public relations.

“I know that we’re trying to work on some social media so that we can get ourselves out there a little bit more. Do you have any suggestions, any ideas?” Nicholson asked.

Baxter said that she had previously helped the bookstore with their social media presence while working there.

“I don’t have any other formal experience with public relations, but being part of this generation, being young, I am competent and literate in social media, so I do plan to cultivate a better presence for ASB,” Baxter said.

Beavers slam Merced out of the park in doubleheader