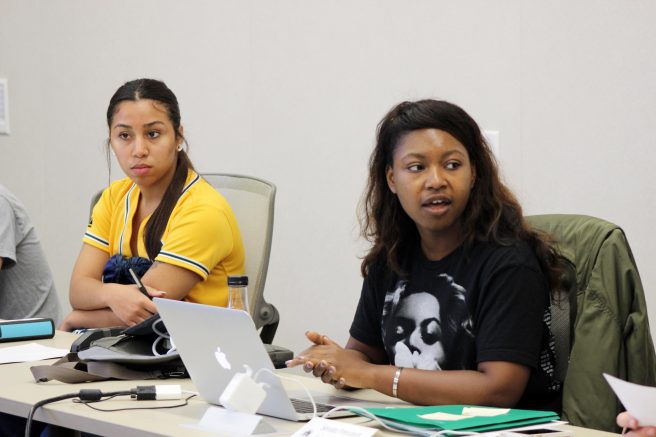 Guzman, first semester student at ARC, briefly introduced himself to the board and explained why he wanted to to be a senator.

Senator Laurie Jones was asked what issues he would like to work on.

The students here don’t know anything about the events and stuff,” Guzman said.”That’s what the school really lacks. I plan on doing something about that.”

The Student Senate voted unanimously to appoint Guzman to the Senate.

During the first reading of bill F16-09, Michael Spurgeon from the American River Review (ARR) magazine spoke to the board about what the magazine does, the awards they’ve received and the need for continued support in the form of funding from ASB.

“It is a magazine that showcases the creative talents of American River College students, both writers and visual artists,” Spurgeon said.

F16-09 would allocate $1,000 in funding for the Review to help support the activities of the magazine.

The seven-person ARC Vocal Jazz Ensemble lobbied the Senate for funding to attend the 2017 Jazz Educators Network National Conference in New Orleans during the first week of January.

ARC’s Vocal Jazz Ensemble is one of six ensemble’s selected to participate in singing in front of a national audience at the conference.

Gabe Catabran, a baritone, said that the ensemble had eight albums on sale at the bookstore and cdbaby.com.

After the song was over, the entire room applauded their performance.

“I really witnessed you guys working really hard to fundraise,” Scott said “I just want to say as a group on ARC I’m really proud that I’m sitting on ASB and representing you guys as well, so thank you so much for coming.”