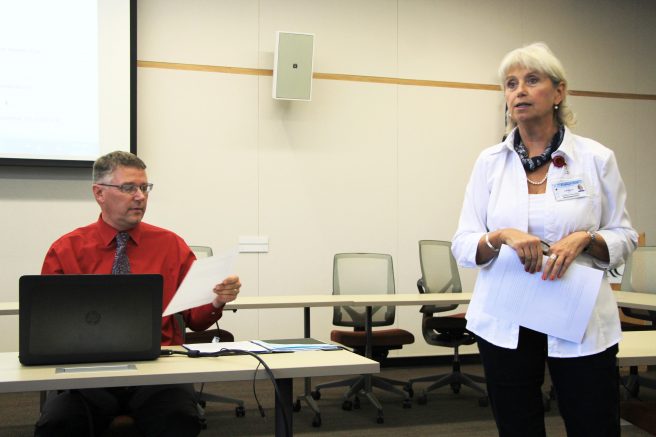 Professor Julie Blaney (right) gives her proposal for creating a Certified Nurse Assistant & Home Health Aid department separate from the Nursing Department to the board of the American River College Academic Senate as President Gray Aguilar (left) reads the proposal at their September 8, 2016 meeting. (Photo by Robert Hansen)

“The proposal that my partner and I are making to the Senate,” Blaney said, “is that we pull that CNA/HHA program out of the nursing department and make it its own department and that I would be chair of that department.”

Blaney said that she would love to see the program grow but that an issue is how funds are allocated within the nursing department.

“Ninety percent of funding goes to nursing because it’s a big program and then we get about ten percent of it,” Blaney said. “We could go after our own Perkins funding as our own program.”

Currently, the program has only one full time instructor, Blaney, and cannot grow without more funding.

“It’s a community need,” Blaney said. “Every term I get no less than 40 applicants to be in my program with 15 seats.”

A unanimous vote took place during the nursing department’s scheduled meeting in August agreeing that separating the licensed nursing program from the programs CNA/HHA was in the best interest for the program growth and viability.

The Senate supported the possible separation of the nursing and CNA/HHA programs that will have to ultimately be approved by the district. 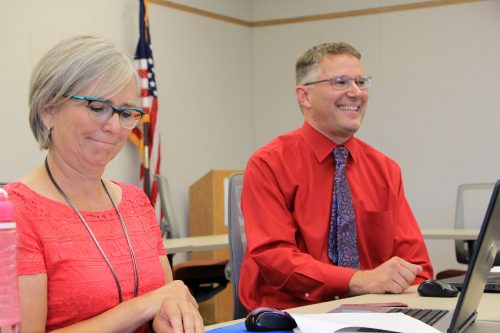 Secretary Robin Reilly (left) and President Gray Aguilar of the Academic Senate, listen to comments from members of the board at the September 8, 2016 meeting. The proposal of a new department was one important topic of the day’s meeting. (Photo by Robert Hansen)

The Senate also listened to representatives from the physical sciences and astronomy, engineering, fashion and journalism departments requesting critical hires for the spring 2017 semester. These hires will subtract from the pool of hirings available for the upcoming fall 2017 semester.

Professor David Austin addressed challenges the journalism department is facing after the resignation of Walter Hammerwold who had previously served as chair of the department, full time faculty member, mentor to the students as well as the advisor to three student publications on campus.

“Journalism is in a truly critical position,” Austin said. “In a best case scenario, the journalism department is one full time faculty member. Worse case scenario is that there’s nobody in there.”

As a result of Hammerwold’s unprecedented success in elevating the quality of ARC’s journalism program and his continual work to nurture it, his departure in July left administration scrambling to replace him in August.

The two adjunct faculty members who they hired to replace Hammerwold, he said, were brand new adjuncts whose futures at ARC next semester are uncertain.

“The problem is this, whoever this person is that’s going to be hired has to do two very important jobs,” Austin said. “One, is they need to be able to teach the core classes … the other part of that, is that we need somebody who can run a school newspaper, and run it well.”

Department Chair of Physics and Astronomy Cecilia Hernandez said she has needed to replace Dr. Brooke Haag, who had resigned, as well as another professor who in May accepted a full-time tenured position at another college.

“We went, during the summer, on an all out very exhaustive search,” Hernandez said. “We were able to hire one emergency LTT(full time non-tenure) and six adjunct faculty members to cover everything.”

Hernandez said that her department’s classes are in high demand by students who need to transfer to 4-year institutions and that the most impacted students are in the engineering program where many of the Physics 400 classes are required.

“The physics department has been on a steady growth for the last five, maybe six, years,” Hernandez said. “We have grown to the point where we now offer morning, afternoon, and evening classes.”

She said it has been a challenge finding qualified part-time adjunct faculty who can teach at the necessary level as most qualified candidates are only interested in full-time job offers.

“Hiring good instructors for physics, physical science, and astronomy is extremely hard,” Hernandez said. “This is actually the first time in our history that we have more adjunct faculty than full time faculty. There are six full time instructors and 10 adjunct faculty.”

The board will vote on which critical hires to support at their next meeting on Sept. 22.

Be the first to comment on "Academic Senate supports proposal of new department, listens to struggling departments"