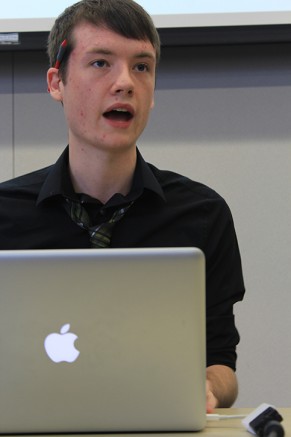 CAEB President Justin Nicholson reads the day's agenda to begin the CAEB meeting Tuesday. Nicholson, along with the rest of the board, discussed the final details of next week's Club Day. (Photo by Robert Hansen)

The American River College Associated Student Body Club and Events Board finalized the games and events for the “Superheroes vs. Super Villains’’ Club Day, discussed campus health services and established the first ASB short-film festival at its Tuesday meeting.

Super power freeze tag and a pie eating contest are some of the activities students can participate in at Club Day next week.

“The goal is to take everybody from the other team back to your base,” Harwig said. “Like, you captured all the villains.”

“I like that,” said CAEB President Justin Nicholson in response to Harwig. “CAEB, get ready to capture some superheroes.”

Faculty, staff and students from Folsom Lake College have been lobbying the legislature for increased campus services, including mental health, and a survey of students at Folsom Lake showed support for a $10 health services student fee.

Folsom Lake College requested support from the other Los Rios schools for increased campus services to be an issue to be voted on in a district election.

CAEB feels that ARC students should be allowed to vote on this issue in a district election.

The First Annual ASB short-film festival was also established at the meeting.

Submissions are open to any ARC student or club for films between three and five minutes in length and are tentatively due by April 8.

The ASB short-film festival is currently scheduled for April 22 from 1 p.m. to 4 p.m. in community rooms one and two, with prizes for the top films.

The details of the event have yet to be finalized as funding for this event has not been approved.

Be the first to comment on "CAEB discusses campus health services, short-film festival at meeting"