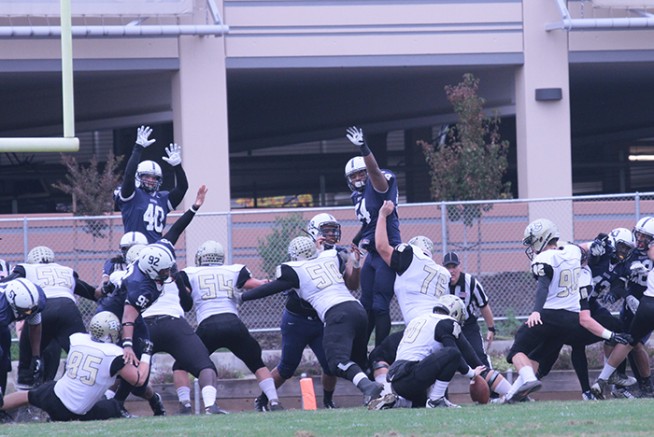 Former American River College football player Antonio Perez (54), seen airborne to the right attempting to block a kick during the 2014 season, died yesterday due to an unverified cause. (File Photo)

An American River College football player, who was a part of the team that made it the State semifinals in 2014, died yesterday, according to ARC football coach Jon Osterhout. The cause of death was not immediately verified.

Antonio Perez was a defensive lineman for the Beavers for one season in 2014 and registered 6.5 sacks over 10 starts.

Osterhout said that Perez was an “unbelievable teammate and person,” who had “unbelievable respect for people not just on the team but also people on the American River College campus.” 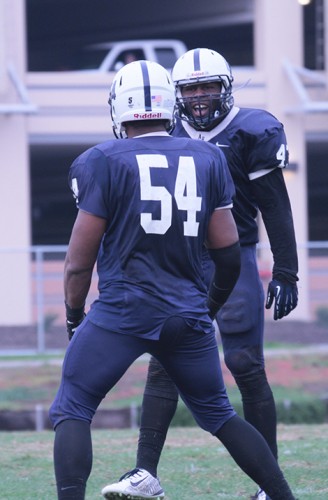 Offensive lineman Rafael Aguilar, who was a teammate of Perez’s, said via Facebook that Perez was a “great energy person” even back when they played high school football against each other.

“(He was) just an amazing person, football player, and teammate,” Aguilar said. “Everyone loved him and (he) was a hungry football player whose work ethic in the classroom, in the weight room and on the field was second to none.

Aguilar added that several of his teammates from that season have gotten in touch with each other to talk about their memories of him.

“We’re all going to miss him, but all who knew him know we have an angel guiding and watching over us,” Aguilar said. “(I) couldn’t have been more honored and blessed to (have known) Antonio Perez.”

According to Aguilar, Perez attended UC Davis after leaving ARC.

Matthew Nobert contributed to this report