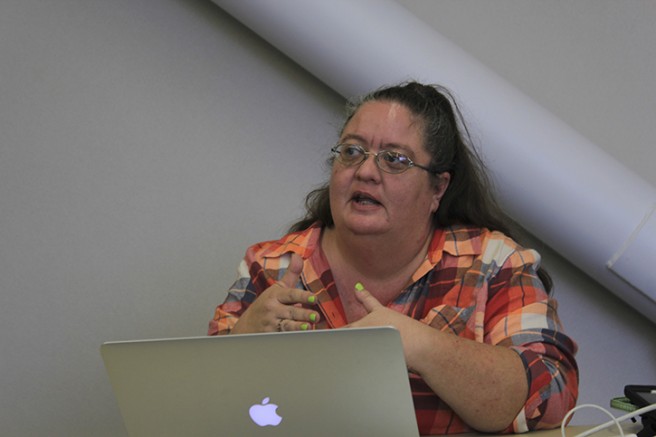 Director of Communications Tami Dunning disusses a propossed bill at the Feb. 18, 2016 Student Senate meeting. Dunning also noted additional information on the cancellation of March in March, though the board had no further comment. (Photo by Robert Hansen)

The Associated Student Body (ASB) Student Senate and Clubs And Events Board (CAEB) ran into complications while discussing the formation of an ad-hoc committee, whose purpose is to plan the joint end-of-the-term banquet for CAEB and Senate members.

30 minutes was used for the item while most of the remaining time reserved for any item on today’s agenda was 10 minutes.

Side-bars and conversations were heard during other members time to speak, forcing Senate President David Hylton to take control of the meeting.

“Alright, I need the side talk to stop,” Hylton said.

At one point the meeting was so disorganized a member of the public, Parliamentarian and ARC student Daniel O’Neil offered his advice.

“I can help fill in the details to help make this go smoothly,” said O’Neil, “If that’s ok with you chair (Hylton)?”

Ultimately, the ad-hoc committee to plan the end of year banquet was formed with CAEB President Justin Nicholson as chair.

Senators Regina Drake and Roberto Garner were sworn into office at yesterday’s student senate meeting, while Hylton announced he will be seeking re-election this semester.

The March in March cancellation was not on the agenda during the meeting.

Director of Communication Tami Dunning briefly informed the board about the Student Senate for Community Colleges (SSCCC) and its plans for next month’s event.

“The SSCCC wants to in April have a new advocacy event at the state capitol,” said Dunning.

The board had no further comment on Dunning’s statement during the meeting in relation to the cancellation.

In a letter sent out by head of the March in March task force Greson Liahut-Sanchez, it was proposed that the march be localized at each individual campus with a statewide WALKOUT day and/or peaceful protests on all campuses in mid-March.

The letter and information in it was also not addressed during the meeting.

Be the first to comment on "Senate has procedural difficulties, senators sworn in at meeting"