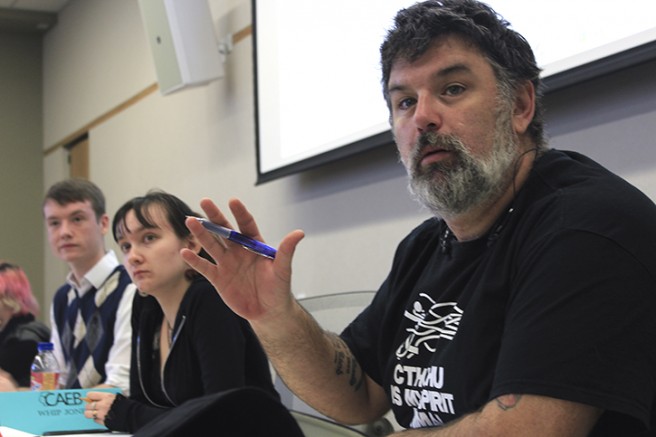 CAEB Director of Communications Bruce Rand asks a question for the proposed theme for next month's Club Day. Ideas discussed at the meeting included a potential "heroes and villains" theme. (Photo by Robert Hansen)

Themes for next month’s Club Day were discussed and two bills were passed at Tuesday’s Club and Events Board (CAEB) meeting.

Rep. Mikayla Harwig of the Medieval Battle Club suggested a “Heroes and Villains” theme with clubs dressing up as characters such as Marvel or DC super heroes and villains.

“Every group would have their own hero theme and game,” said Harwig. “We like comics.”

CAEB Director of Communication Bruce Rand was enthusiastic about the idea along with most of the members of CAEB.

“I kind of like the idea of us being the villains,” said Rand. “And our club’s defending club day, that’s classic.”

CAEB passed a bill giving $200 to Medieval Battle Club for general supplies for its activities.

Another bill was passed giving $150 to Phi Theta Kappa Honor Society for its first annual fundraiser banquet, which will be held at the Timber Creek Ballroom in Roseville on March 12.

Project organizer Kevin Jenco was at the meeting in advocacy for the bill.

“We were hoping to get this grant to get this thing of the ground,” said Jenco. “It was a little bit more expensive than we are planning on it being in the future.”

Timber Creek Ballroom offered free venue rental for the event as well as lower rates on meals, according to Jenco.

“We saved a lot of money there,” Jenco said.