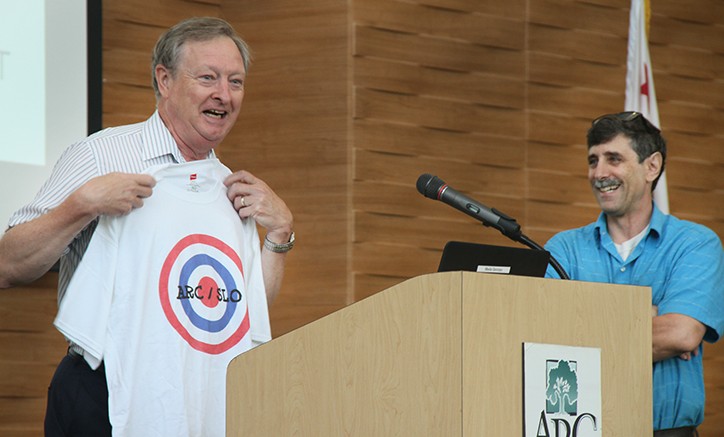 John Gamber, left, receives a shirt from fellow employee Randy Schuster at ARC's Fall 2015 Convocation for consistently 'hitting the target.' Said Gamber: 'As someone who wore camouflage for 15 years, I cannot tell you how nervous this makes me.' (Photo by Kameron Schmid)

The project, for which planning will start this semester, comes on the heels of the construction of a new culinary arts building and of additions to the student services building.

Convocation, which takes place biannually, brings together college employees to recognize faculty for their years of service, hear about new initiatives and administrative plans for the coming semester and re-connect after the summer recess.

“What we do here at ARC and at the Los Rios district is at the front lines of addressing the gap between the rich and the poor,” said King.

King said the goal of the district is to make sure the four Los Rios colleges are full relative to the money that they are receiving from the state.

“We want to provide full access to our funded capacity,” said King.

King also said the district makes plans so that it can keep as many of its services operating as possible when the state provides less money.

“We don’t spend money until we have it,” said King. “Many community college districts spend money that they might have.”

King reflected upon the fact that his afternoon presentation at Folsom Lake College was not only webcast but also cablecast on Comcast channel 15.

“I think it’s great considering that not everyone can be here physically,” he said. “The more people who can see, the better.” 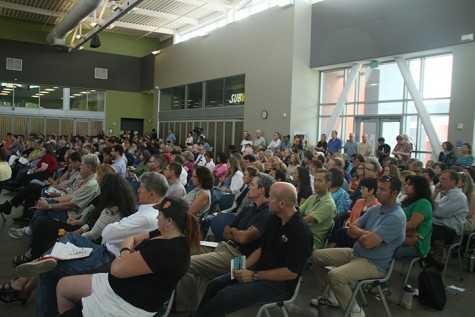 The crowd of ARC employees, which included faculty, administration and classified employees, filled the cafeteria in the student center for the Fall 2015 Convocation Friday. (Photo by Kameron Schmid)

The morning’s speeches began with a presentation by ARC President Thomas Greene.

Greene discussed four areas in which he wanted to “improve the conditions of learning.” These are school facilities, health and safety, professional development and instructional technology.

Greene unveiled new safety initiatives, which include installing security cameras and new bike cages, a safety app that may be developed by the district and increased defense workshops.

Greene received applause when he discussed his health initiatives, which included the school’s decision to ban tobacco use on campus beginning in January 2016.

Randy Schuster gave John Aubert and John Gamber shirts with targets on them to commemorate their successes in helping school programs.

“This guy hit the target every single time,” said Schuster.

Said Gamber, “As someone who wore camouflage for 15 years, I cannot tell you how nervous this makes me.”

Faculty were honored on the ten, twenty-five, thirty and fifty year anniversaries of their employment with the school. New faculty, staff and administration were also introduced.

Among those was Aaron Bradford, an English professor.

Noue Leung, another new English professor, added that it was her first convocation.

Accreditation faculty chair Amanda Corcoran and school liaison Adam Karp reminded the audience that the school will be visited by a team from the Western Association of Schools and Colleges from October 5 to 8 to assess if the school will have its accreditation renewed.

Corcoran encouraged people to ask the visitors if they need help, to answer any questions they have and to participate in the school wide forums during the visit.

Dustin Johnson, the president of the Los Rios Community College District Board of Trustees and an ARC alum, tried to sum up the general mood of the event.

“Convocation is an enjoyable mix of seeing old faces and meeting those who are new to the district,” said Johnson. “School years come and go, as do semesters, but our commitment to the students never fades.”

Public Relations Officer Scott Crow said that a recording of the convocation will be available online in the coming week.

Fierce: CAEB President’s transgender comment “should not have been said”