As he carries around a white, plastic Hefty bag in the hot afternoon, Bill Cheely said people don’t look at him the same anymore.

“It’s like, I was your neighbor,” said Bill. “People steal our shit. You are treated so differently without a house.”

Bill and his wife, Denise, have been together since 1984 and attended American River College in the 1980s. But a series of events that led to them losing their jobs, home and possessions brought the Cheelys back.

Denise, 49, said she worked as a yard duty at an elementary school and then at a Dollar Plus. Then the recession hit.

“The store went out of business,” said Denise. “I got put on unemployment. When I started looking for other avenues, the unemployment ran out. We’re not in the statistics anymore.

“Because of my age, I was told retail is more for the younger (people). I applied and applied without getting anywhere. Then we lost our home.” 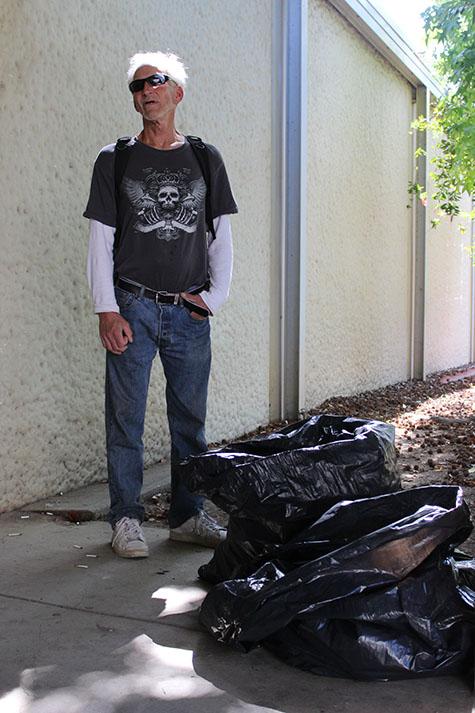 Bill Cheely stands in front of the two bags full of recyclables that he and his wife, Denise Cheely, collected from the trash receptacles on campus. The Cheelys, who first attended ARC in the 1980s, said that since becoming homeless during the recession, they’ve been forced to live on the $20 per day they typically get from collecting cans. (Photo by Barbara Harvey)

Bill and Denise lived in a trailer park. But when Denise lost her job, they said they had trouble keeping up with the payments to the owner.

“He said ‘you’ve been late twice this year and you have to vacate the space,’” said Bill, 59. Their trailer had to be sold to pay their debts.

With no jobs, no home, parents deceased, and children out of town and out of the state, the Cheelys took residence under a bridge.

“I know a lot of people steal,” said Bill. “That’s what they do to survive out there. Very few people want to help. We don’t beg, we don’t ask. I’ve tried it but I can’t do that.”

Bill said that sometimes the church they sleep near calls or threatens to call the police on them.

“We have a church that calls the cops on us — a church,” said Bill. “Things aren’t the way they’re supposed to be.” 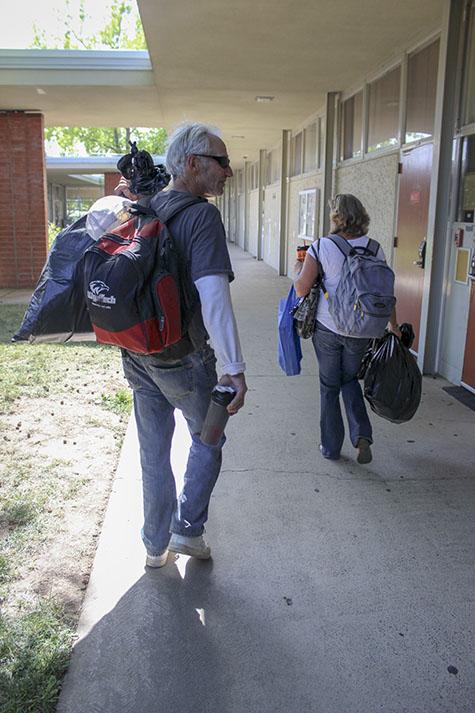 Bill and Denise Cheely walk their daily route on campus, stopping at every outdoor trash receptacle to search for cans. The Cheelys, who eke out their living collecting recyclables, said they’ve faced harsh judgment from former neighbors. (Photo by Barbara Harvey)

With no stable source of income, the Cheelys spend “a couple hours a day” rummaging through the garbage cans on campus looking for plastic and aluminum.

Bill said that on a good day, they can get up to $20 if they turn in their recyclables.

“I don’t want to be an interruption,” said Denise.

Added Bill: “We don’t want to be a nuisance or a big problem.”

Denise wants to go back to work and is taking classes at ARC in hopes of earning a degree in Early Childhood Education.

She said her classes are paid for by the Board of Governors fee waiver, but that she is ineligible for financial aid because she was on academic dismissal due to her grades when she attended ARC in the 1980s.

“I’m taking some science (classes) because it’s fun to me,” said Bill. “But when it turns to algebra, that’s when it gets tough.”

“I’m trying to get myself to where I can get back to work,” said Denise. “My teacher has given me a chance and I’m going to make it work.”

ARC professor puts his mark on the Art Hotel