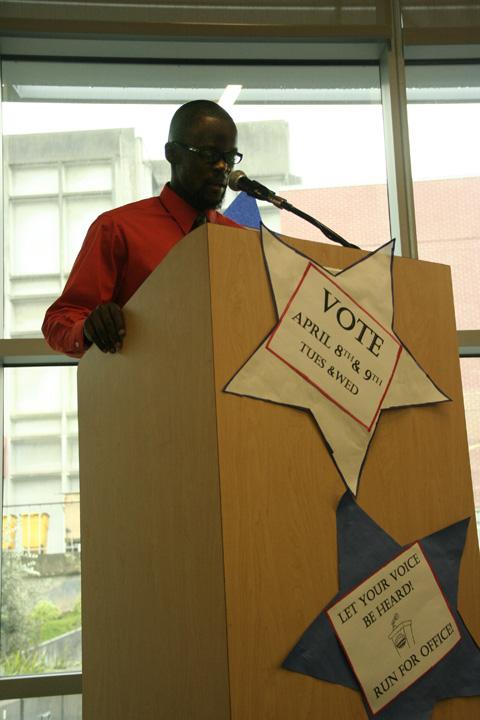 Omba Kipuke is running for the position of Los Rios Student Trustee.

Elections for the Associated Student Body student leaders and Student Trustee are underway. Students can vote until 11:30 p.m. through their eServices account.

At the forums held April 1-2 in the student center, the candidates were able present their platforms and answer student questions.

The rainy weather those days brought people indoors, allowing ASB to make the student body more aware as to some of the candidates for office.

“I think it is important for students to know who is actually running the student organizations,” construction management major Tim O’Shea said.

Some students have little idea who represents them are or what the positions held by those representatives.

“Most of the time we have no idea who on the panel is representing us,” chemistry and culinary arts major Illiana Teran said.

She said the forums “help out a lot because I had no idea who those people were.”

Some students feel there should be more of the forums and that they need to be more publicized.

Many students witnessed the candidate forums simply because they walked by and were curious as to what was going on, though other students did know about the event beforehand.

“One of my classmates told me about it and I just happened to be around,” kinesiology major Amber Silva said. “I think it should be done more often to get more people involved.”

Watching the forum was interesting to Silva and several others who stopped to hear what the candidates had to say.

“It kind of lets us get a little closer to the political world,” Silva said. “It’s a good firsthand experience to see the voting process.”

O’Shea wants the future student leaders to know that “leadership is not about getting stuff. It’s about providing for the students.”

Something nearly all students can agree on is that they want a candidate with realistic goals that can be accomplished and someone who is a strong leader.

Go to arcurrent.com for more election coverage and results.

Sophomore co-captains are the ultimate package

Softball hosts alumni game to prepare for the upcoming season