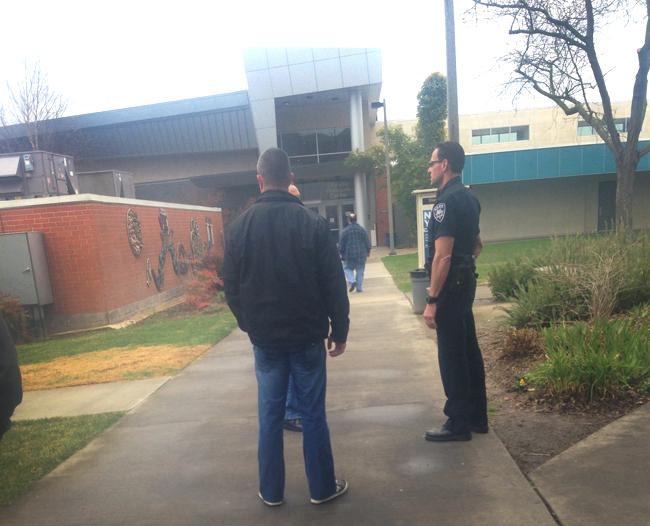 - Campus police interview faculty regarding the disturbance on Thursday near the Learning Resource Center at 12:53p.m.

By Kyle Moore and John Ferrannini

A disturbance in a Writing Across the Curriculum class led to the police being called to the Learning Resource Center.

Desirae Casteel, a Social Science major, was told to leave her WAC class for being disruptive and that her instructor, Jim Huntington, would see her separately.

“He told me to wait outside the class,” Casteel said. “When I went in, I told him I thought that was uncalled for.”

According to Casteel, she asked Huntington if she could speak with his supervisor.

When that supervisor couldn’t be located, the police were called.

“He came back in and contacted the police,” Casteel said. “Nobody yelled or cussed or raised their voice.”

The police spoke with Huntington and Casteel for a few minutes.

When asked about the situation, the Los Rios Police Department officers on the scene, Winchester and Quirarte, declined to comment.

The LRPD website states that a warning was given in a verbal only disturbance of the peace incident at the LRC at 12:53 p.m.

Students who would like to see a complete list of ongoing incidents on campus and the rest of the Los Rios district can go to police.losrios.edu to view the Crime Logs.

The Current will update the story as more information becomes available