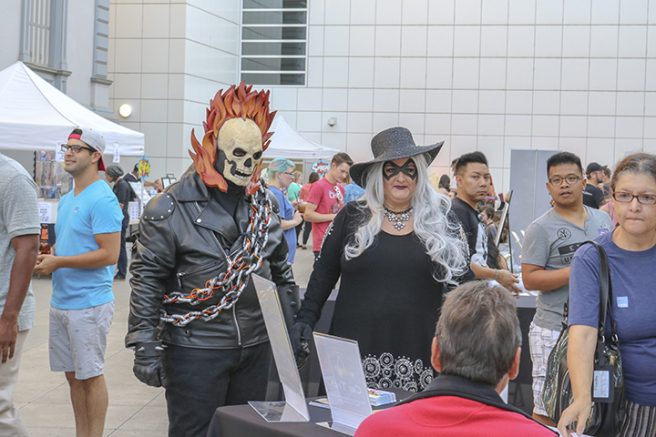 Two cosplayers visit one of the many booths at Artmix at the Crocker Art Museum in Sacramento, California on Sept. 8 (Photo by Luis Gael Jimenez)

The fourth annual “Crocker Con”, a comic book convention in collaboration with Artmix, where cosplayers and various artists on Sept. 8 showed their creative styles at the Crocker Art Museum.

Crocker Con this year hosted an event that showed different artists talents on display with a different theme for each artist.

Artmix was a demonstration of art from people dressed in costumes, disc jockeys performing on stage and a unique art style of using masking tape to recreate Star Wars themed characters and space ships.

Danny Scheible, an artist at the event, created a style he coined “TAPIGAMI” where creation is brought to life through tape.

“I was inspired to create TAPIGAMI because I felt that art needed to become part of everyday life,” Scheible said. “I felt a huge lack of accessibility to the ideas of creativity that are learned through creating art.”

The style of “TAPIGAMI” was inspired through Scheible’s eyes as a means of connecting with people on a personal level.

“I wanted to be able to create with everyone I met everywhere I went,” Scheible said. “To that end I sought out a material that was inexpensive and you use to create without needing tools and facilities. Then I had to create my own mantras of making in order to inspire and encourage everyone to make art.”

Another artist at “Crocker Con” named John Cattrell had a comic book style he had showcased, he also attended a class with fine arts professor Joy Bertinuson at American River College.

“It was awesome.” said Cattrell. “Very helpful, great instructor, she (Bertinuson) was able to help you resolve problems.”

Michael Calero, an artist who attended the Crocker Con event had said that his wife Tiara Simoni teaches at American River College.

However, not all that had attended Crocker Con were artists who could draw.

Bob Daloia and Dan Rodriguez were two men who had dressed up as the main characters from “Back to the Future” with their own personal DeLorean time machine, used for fun and entertainment purposes.