Armed with a paintbrush and clad in paint-splattered denim with a rainbow scarf holding back her natural hair, Aliyah Sidqe stands a full three feet above a crowd of onlookers in the Student Center. Around her, American River College’s Black Heritage Celebration drew crowds of students and faculty during it’s late February exhibition.

Despite the dozens of people bustling around and watching below her, Sidqe layers colors on canvas with such ease that it’s impossible to believe she was meant to do anything else. She pauses routinely to engage with friends and inquiries from spectators.

Sidqe is a self-taught painter and a studio art major at ARC. She has been enrolled in community college for a total of three years, but she didn’t always attend classes during that time.

After graduating high school at 15, Sidqe said she felt pressured to enroll in college, but her new found freedom left her with no sense of direction and she was ultimately put on academic probation.

“I think at first, when I was first here… I wasn’t involved in any clubs or anything and like that, I think, contributed to why I didn’t do so well,” Sidqe says, “It took me taking time off and living life and learning about myself to realize what I wanted from school.”

Sidqe returned to ARC — this time, with a defined goal. 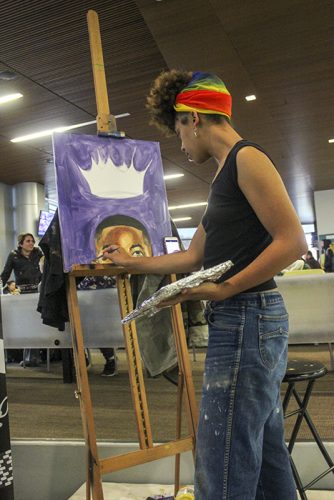 “I want to work with kids, but in order to do that you have to get a masters in psychology. So I figured I can do studio art, get that degree and then go back for the psychology,” she says.

Sidqe has been painting her whole life. Her stamina wavered in high school but she caught a second wind in college and says she came back with a clear direction.

While covering a diverse arrangement of subjects, the heart of her work is a representation of African-American femininity.

“I try to represent being a black woman. It’s like two marginalized communities, two minorities in some ways. I think I just try to fuse those things together and represent people who are not maybe recognized all the time.” Sidqe says.

Sidqe’s art can be found on a larger scale at three different locations across Sacramento. The largest of her murals is tucked in Opera Alley, in between 16th St. and 17th. St. near Fremont Park. The artwork is spread across the walls of two apartment buildings. Sidqe spent four weeks in the heat of summer 2017 completing it.

Sidqe found she could make a profit off her talent and now offers work on commision. Around half of the work she does is for profit and a majority of her commissioned work are portraits.

“People love pictures of themselves,” she says.

Confident in her direction, Sidqe says she has found her place at ARC.

“I think it’s really important to know know where you’re going to really do what you want to do here,” she says. “So when I came back, it was like I had a direction. I knew what I was going for and so I could be more passionate about it.”

Sidqe also found a place in ARC’s Umoja-Sakhu Learning Community. She describes it as a “black student union.”

Marti McClellan-Morehouse is a Student Success Support Program Specialist at ARC and an “elder” for Umoja-Sakhu.

“Basically we have dedicated classes where the curriculum is specific to the African and African-American diaspora. She is such an asset in those classrooms,” McClellan-Morehouse says. “I mean, we hear her voice all the time in terms of world issues or issues related to students, women’s issues. She’s very verbal about these things and very creative in, not just the artwork she creates, but how she speaks.”

Sidqe’s newfound direction and increased involvement on campus has paid off academically. After a recommendation from her English professor, Bob Lynman, Sidqe enrolled this semester as an honors student. Despite never having seen herself as an honors student, Sidqe says she felt it was important to challenge herself.

Tasiya Owens is an honors student at ARC as well and became friends with Sidqe through Umoja-Sakhu.

“I am happy to say that I have been around Aliyah in her element and in multiple forms,” Owens says.

Both Owens and McClellan-Morehouse are admirers of Sidqe’s style and artistic ability.

“I think she is very sensitive to her culture and who she is as a woman, as a black woman,” McClellan-Morehouse says.
For Sidqe, her style is an extension of her confidence.

“I’m heavily influenced by the ‘70s and women like Pam Grier, who wore their hair naturally and just really colorful stylish clothes they wore made it easier for me to love myself by embracing this style,” Sidqe says.

From her style, to her work with Umoja Sakhu, to her live painting performances, Sidqe exudes individuality and a clear sense of identity.

“I feel that her art is as innate to her being as the thoughts in her head or remembering to breathe,” Owens says.

Through her art, Sidqe found confirmation in her identity and path in life.

“I feel free when I paint. Painting allows me to create whatever world I want. It allows me to free my mind,” Sidqe says. “The thing I love most about painting is the fact that there are no rules, there are no guidelines to it and it’s something that I can explore on my own.”