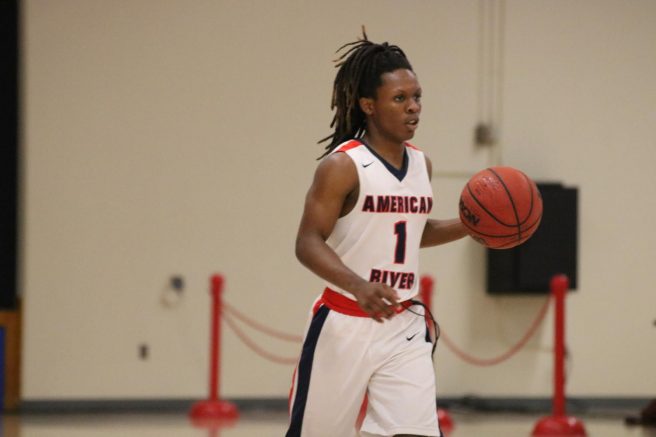 The men’s basketball team at American River College came up short in a home game against Cosumnes River College on Friday Jan. 31, losing by a final score of 95-87. With the loss , ARC’s overall season record drops to 12-10.

In the early minutes of the first half, both teams  engaged in a firefight, with the score remaining close to even throughout. A big factor in keeping the score close was a hot start from ARC freshman guard Vernon Robertson, who ended the night as the game’s leading scorer with 25 points.

However, Cosumnes River forward Christian Hough performed just as well, shooting 8-12 from the field and ending the game with 24 points. The quick starts from Robertson and Hough is what most likely contributed to the tight score at the end of the first half.

After a few more lead changes toward the conclusion of the first half, ARC went to the locker for halftime, losing 42-40.

During the halftime break, former ARC basketball standouts Deonta Dorrough, Jay Bridges and Damien Johnson were inducted into the ARC Men’s Basketball Players Circle (or Hall of Fame) as a result of their accomplishments during and after their collegiate basketball careers. Current head coach Mark Giorgi took part in the halftime festivities along with the former players.

But after the halftime break, ARC fell into its biggest cold streak of the game. At about the middle point of the second half, Cosumnes River began to pull away on the scoreboard, even leading by 15 points with just over eight minutes to go in the game.

Despite the sizable lead that Cosumnes River possessed, ARC continued to battle offensively  , driving the ball into the paint and drawing the foul to get to the free-throw line. While ARC was able to narrow the deficit back down to single digits with a few minutes to go in the game, they did not capitalize on free throws as much as they would have liked, according to Giorgi, who stated afterwards that “missing free throws was a big one tonight.”

Although ARC managed to bounce back fairly well after the cold streak, they were still unable to overcome Cosumnes by the final buzzer.

In addition to a desired higher free throw percentage, Giorgi said he also believes that the lack of defensive rebounds was also an issue. ARC ended the game with 30 total rebounds, as opposed to Cosumnes River, who ended with 35.

“It’s always defensive rebounds for us, that’s been an emphasis all year,” Giorgi said. “And then really, it’s about understanding where the shooters are and not losing shooters, no matter what defense we are in.”

Another of ARC’s top performers of the night, sophomore forward Chris Cagle, ended the night with 21 points and nine rebounds. Cagle acknowledges that lack of ball movement might have led to their demise that night.

“In the slump [during the second half], we weren’t moving the ball as well we wanted, we kind of let it sit too much,” Cagle said. “But towards the end, the guys just came together and said, ‘we’re gonna fight and give it our all for this last bit and see what we can do.’ We came up short this time, but that’s just what happens.”

Be the first to comment on "ARC falls short on Alumni Night, loses to Cosumnes River"