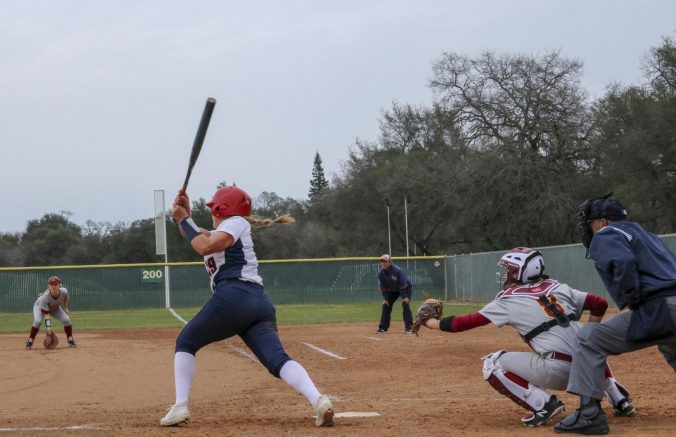 The American River College Beavers softball team came up short against the Sacramento City College Panthers at the second game of the double header on Feb. 23 at ARC, losing 7-1.

In the top of the first inning, Sac City got on the board on a couple of errors by ARC, allowing a runner to score while stranding a runner on second base.

In the bottom of the first, the Beavers responded when freshman outfielder Kirsten Cox doubled in a run but was tagged out when she tried to take third. This was all the scoring the Beavers would do during the game.

The Panthers didn’t get any further than first base until the top of the fourth inning, when they chased pitcher Samantha Whitworth.

After two hits and a walk that loaded the bases in the fourth inning, Sac City was able to score three runs, making it 4-1 for the Panthers.

During the play at home there was a slight dispute regarding the plate being blocked by the Sac City catcher, but it was ultimately ruled that the Sac City runner was interfered.

A final run was scored in the inning before the Beavers were able to retire the side.

The last two runs for the Panthers came in the top of the seventh inning when a couple more runners scored.

The winning pitcher was Marah Range for Sac City and Samantha Whitworth took the loss for ARC, who now stand at 3-7 this season.

“It was a tough loss,” scorekeeper Brian Sprinkel said. “I feel like we missed out on some opportunities, and that led us to being on the losing end.”

Even in the face of loss, however, head coach Lisa Delgado is hopeful for the future.

“Every game is like our classroom,” Delgado said. “We learn from every win and especially from every loss. … Small things add up to really big things, so we just try to learn.”

Delgado said the team, though relatively young, is dedicated to their sport.

“I always say, ‘get 1 percent better every day,’ and I think our athletes have really bought into that,” Delgado said. “They come early to practice, they leave late, they get in extra work. And that’s what has to happen.”

Others have faith in the team as well, especially with the seemingly close bond the players share.

“The players seem to stick together through thick and thin,” Sprinkel said. “They were motivating each other, loud in the dugout, and that’s all you can ask — that they’re involved and motivated.”