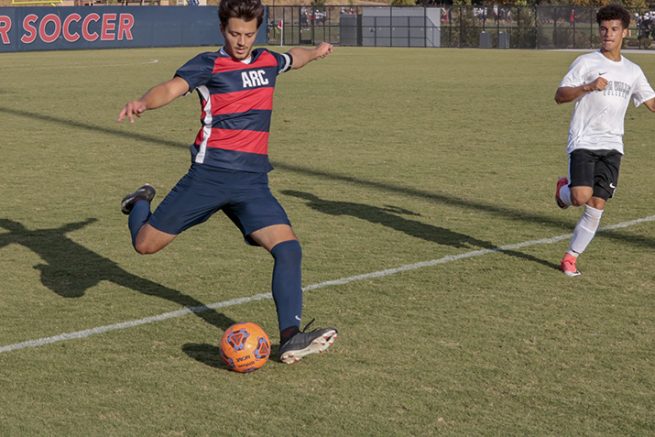 The match started with tough playing between the teams.

The second half was difficult for ARC with NVC taking control of its defense and scoring four goals against ARC.

ARC head coach Paul Hansen said he felt unhappy after the loss and says the game was played well in the first half, but in the second half, the team discipline changed and that led them to lose the match.

“[In the] first half we were disciplined, we kinda lost our discipline structure in the second half,” Hansen said. “It was disappointing unfortunately.”

It was tough for either team to score because of the good communication and discipline from both sides.

The second half started with good defense from ARC but at minute 54, NVC succeeded to score the first goal. Within 10 minutes, Napa Valley College scored another goal.

ARC’s team defense became weaker when the referee issued a red card to Renzo Bozzalla, calling a foul against the NVC player.

James Weston, who was injured in the match, confirmed the team’s weakness in the second half.

ARC couldn’t keep the defense as strong as the first half, which led NVC to score two more goals, making the score 4-0.

Hansen, despite feeling disappointed about the current game, said he feels confident that working hard on the structure of future games will give ARC the opportunity to have a stronger defense.

“We have five games left and we’re trying some of those things get better,” Hansen said. “We got to start defending better.”

The team’s next match is scheduled for Oct. 26 at Cosumnes River College.

There is no age in equality

Be the first to comment on "Men’s soccer defeated by Napa Valley, 4-0"