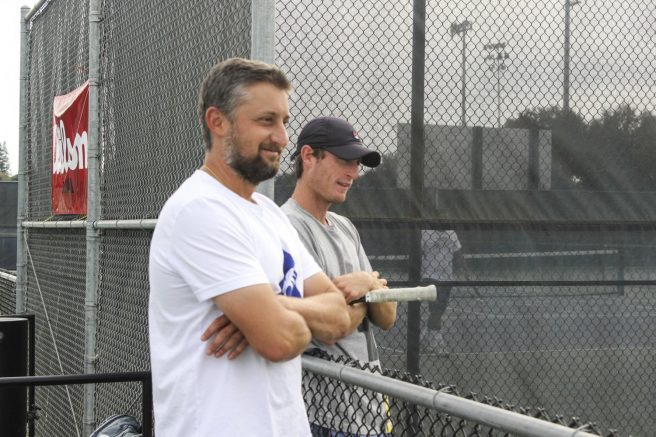 Coach Bo Jabery-Madison relaxes at his computer, his friendly presence resounding throughout his office. His demeanor off duty mirrors that of his on the courts —at ease, confident, with a constant sense of drive that has fueled him throughout his lengthy and lauded tennis career.

Madison is a Northern California native, and was born and raised a mere few miles from his future college campus and eventual job site at American River College.

A longtime athlete, Madison played a variety of sports including soccer and baseball before picking up the racket during his sophomore year at El Camino High School. While joining peers at the Gold River Racquet Club, the future coach learned he had a knack for tennis and became “pretty good pretty quickly,” Madison said.

Madison started college at ARC, and played for the tennis team throughout the late 1990s. Madison brought success to the team while playing for the Beavers, made the All-Conference team twice and was named MVP after two years of achievement in tennis.

Madison went on to play for UC Davis, and during his time with the Aggies paved his path towards success. “I had a walk-on tryout at Davis, and I made the team,” Madison said.

He says he was inexperienced compared to his fellow teammates, who had been honing their tennis skills since age 12 and younger, while Madison started seriously competing much later during his early years of high school.

He had to “work harder to catch up with very experienced players,” and it showed. Madison was named Most Inspirational Player during his second year on the team, and was listed as a scholar athlete throughout his time at Davis.

Madison majored in Communications and Education while at UC Davis, and says he only considered coaching as a career post-graduation. Thoughts of becoming an athletic trainer or a teacher were interrupted when his former coach at ARC offered Madison a position with the team. A mere 22 years old, yet with ample experience gained at Davis, Madison began volunteering as the assistant coach of the men’s tennis team.

After three years of launching players onto university-level teams, the head coach decided to retire, and Madison was encouraged to apply for the position.

“There was no real thought that I would get the job,” Madison said, as he was in the running with experienced coaches who, on paper, seemed more qualified.

Daunted but determined, Madison began coaching in the fall semester of 2005. Madison said he was “thrown in the deep end, really learned on the fly” with the position, yet persevered despite his uncertainties.

Since then, Madison has been leading the men’s tennis team to victory throughout his 13 years at ARC. With he and his team on a winning streak for the past six seasons, coach Madison’s dedication to his players, the Beavers and tennis is obvious.

Madison’s passion for tennis matches his passion for academia, as he spent his summers working towards his Master’s Degree in Kinesiology while concurrently coaching at ARC.

“It’s a whole other ballgame when you have to take accountability for everyone and everything” said Madison of his responsibilities as a coach. Madison’s passion for the game translates through his coaching philosophies, which he impresses heavily upon his team.

Former team member Cody Duong says that Madison’s commitment to his team is shown through “demonstrating what it means to understand discipline, respect and sportsmanship”. “He wants us to succeed in life and holds us to a high standard” Duong said.

Duong said he also admires his coach’s “rigor in his work ethic”, and how Madison makes an effort to get to know his team on a personal level.

Madison does not solely dedicate his attention towards his team while playing, he also places large emphasis upon success in school.

“The court is the key to unlocking doors later in life, but the determining factor is success in the classroom,” said Madison, who focuses on the cultivation of character on the courts and in academics. Madison urges his team to take their passion for tennis into their academics.

Although at a two-year college, Madison says he aims to “simulate four-year athletics program”, and demands “time, energy and effort” from its players. This strenuous schedule prepares the team for their futures as student-athletes at universities with high expectations.

“When I look at the value of my life, it is unfulfilling if it was filled with wins and losses on the court,” Madison said. The coach aspires, and achieves to inspire improvement in all aspects within his team.

Madison’s accomplishments correlate with his players’ character growth and maturity of mind. He aims to guide his team to “develop life skills, become better husbands, fathers, employees…that’s fulfilling and satisfying to me” Madison said, his prioritization of his team’s personal growth evident.

Madison’s relentless faith in his team is honest and unfettered. “I would not trade any job for the position I have here” he said.