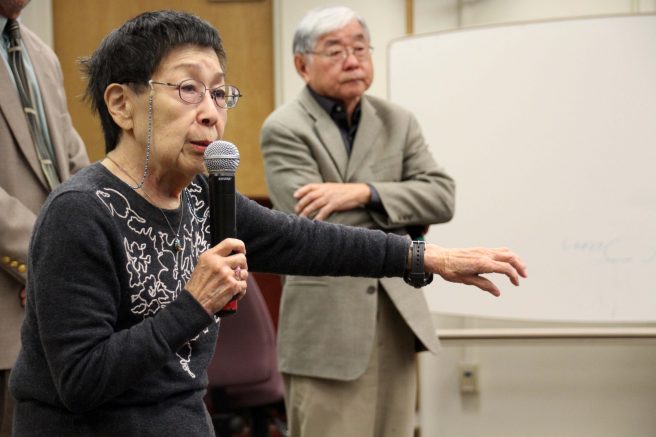 Reiko Nagumo (left) speaks about her experience living in Japanese internment camps during WWII with Lester Ouchida (right) to ARC students in Reaf 160 on Nov. 22, 2016. (Photo by Robert Hansen)

Lester Ouchida and Reiko Nagumo were young children when they and their families were forced from their homes and relocated to remote locations of Arizona and Wyoming because America was at war with Japan.

These two Japanese Americans told their stories of the relocation into “desolate” internment camps during WWII to ARC students during a college hour in Raef Hall on Tuesday.

The camps were in remote areas constructed with sentry towers and barbed wire around the perimeter of the camp. It was communal living, set up in military style, bunkers to sleep in and the bathroom and chow hall had its own separate buildings.

“My dad had a pretty good business and we had a fairly nice home in Florin and all of a sudden we were placed, mom, dad, and five kids in one room,” Ouchida said.

President Roosevelt, influenced by the military, signed executive order 9066 in 1942 which imprisoned over 120,000 people of Japanese ancestry and at least 60 percent of them were American citizens. Over half of them were children.

Ouchida said that they lost their freedom, financially lost a lot, and it had a deep psychological impact being locked up by their own country.

“We saw desolation and loneliness,” Ouchida said, “It makes you think, ‘Am I as good as other Americans?’”

Japanese Americans had a loss of self esteem and self worth.

“There was nothing like this for German or Italian Americans,” Nagumo said.

Nagumo said she hopes that what Japanese Americans experienced will not happen to any other ethnic or racial group coming from abroad and that people need to speak up for others.

Ouchida feels that the xenophobia and racism toward the latino community that have spread across the country are eerily similar to the times of relocation.

“I thought that, with the recent developments, it’s a little bit scary what’s happening in this country now,” Ouchida said. “It was a different time but still, there is a lot of hatred of the Islamic (religion).” 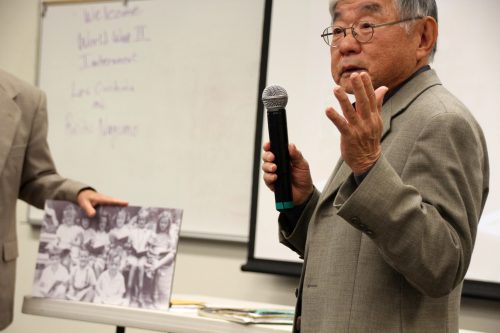 Lester Ouchida speaks about his experience living in Japanese internment camps during WWII to ARC students in Reaf 160 on Nov. 22, 2016. (Photo by Robert Hansen)

Led by President Carter in 1980, a federal commission on the wartime relocation of Japanese Americans ruled that evacuation occurred because of racism, war hysteria, and poor political leadership and had nothing to do with military necessity.

“In those days it was not easy being Japanese or Chinese,” Nagumo said. “In that day and time, if you were an asian immigrant coming from afar, you would never be able to become an American citizen, never.”

She said her parents weren’t able to become citizens until the 1950’s.

Nagumo said that after war was declared on Japan, her friend Mary Frances told her, “My momma told me to tell you, that we’re at war with Japan, you’re Japanese. I can’t play with you anymore.”

Nagumo was mortified at being told she couldn’t play with her friend because she was a different color, a different race.

“But you know what, that girl spoke up for me then as a seven year old,” Nagumo said. “You’ve got to learn how to speak up for other people.”

ARC student Destiny Dixon said she was shaking after what she heard from Nagumo and Ouchida.

“As a member of the LGBT community and someone who is very concerned about my fellow Americans,” Dixon said. “I don’t want Muslims to end up in camps. It’s a horrifying thought that someone like Donald Trump is working to get special ID’s and Muslim registration out there. You can’t register Muslim Americans or make them wear badges like the holocaust.”

5 Comments on "The internment of Japanese Americans retold by survivors"