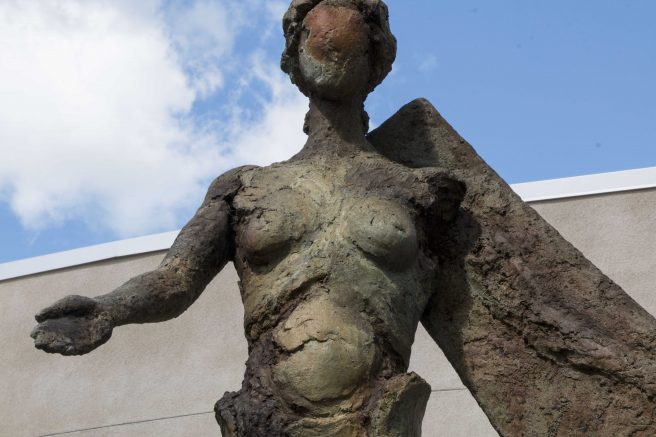 Three compelling figurative angel sculptures stand spaced apart from one another facing outward from the Student Services building, invoking curiosity and perplexity over their eccentric shapes.

For many returning students, these sculpture installations seem almost to have come out of nowhere. There are no plaques, no explanations, only curiosity over what these angels might mean.

They’re easy to pass by with just a glance, although once you take that first look, the closer you find yourself to the sculptures, staring intensely at their almost hollow and eccentric shapes.

Just on their own, though, the sculptures are enough to capture and interest those who pass by their unique forms. They are similar in their design: graceful yet misshapen, powerful but humble. Their differences lie in their structure. 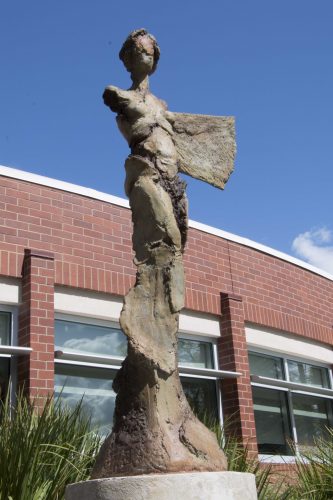 Figurative sculptors “Agora’s Light I, II, III” designed by the artist Garr Ugalde are located in front of the Student Services building at ARC.

These differences aren’t noticeable until you take a closer look: the first two angels have no arms, and both have only a single wing.

The third angel is where it gets interesting; although she has one wing that points downward, one arm extends out toward the viewer as though she is reaching or calling someone to her.

For a set of angel sculptures that just appeared out of nowhere, they certainly have more to them than meets the eye. Although what meets the eye is definitely worth the look regardless.

Likewise, they underwent a long process that involved designing, a selection process, sculpturing them, and placing them in its location.

The project first began in the fall of 2015. Inspired to increase the number of permanent art collections that are on campus, a committee of instructors and art students held a competition to select a professional artist to design and create a sculpture, according to Patricia Wood, a member of the committee.

The selection process narrowed it down to four finalists: Roy Tatman, Yoshio Taylor, Garr Ugalde and Marc Foster; each created proposals and miniature sculptures that went through several changes.

The finalist in the competition, Garr Ugalde, is a local and professional artist who has done many other public art designs and sculptures, and has been sculpting for 25 years.

He proposed his idea to the committee: a sculptural triptych called “Agora’s Light I, II, & III.” 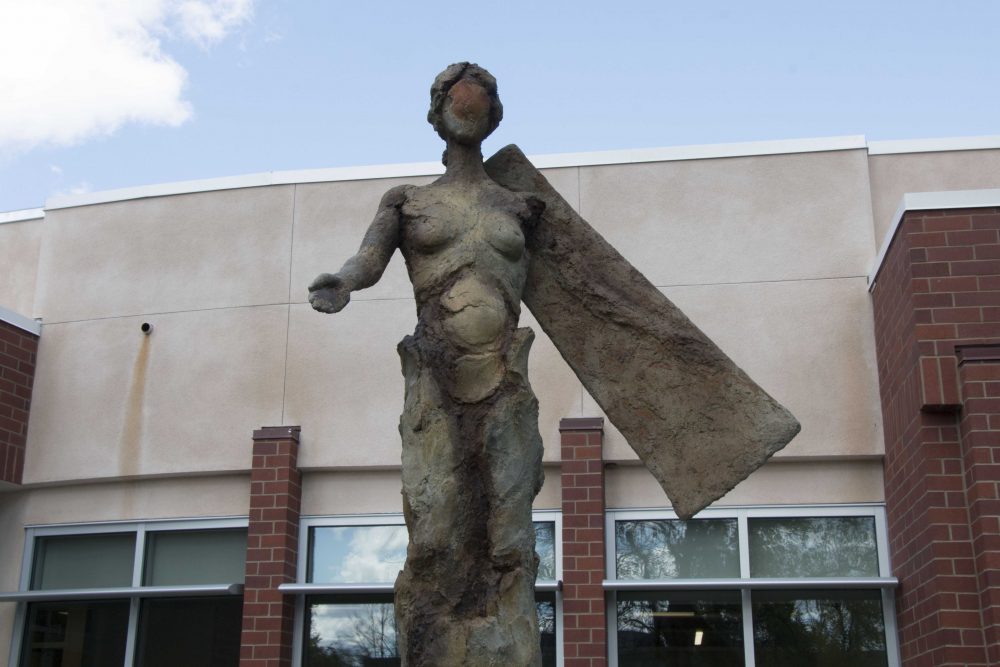 One of the figurative sculptures located on campus. The third angel (above) signifies activist engagement. Her hand is extended to elicit discourse with those who have reached out. (Photo by Lidiya Grib)

Ugalde’s idea for creating the figurative sculptures came from a historically ancient context that traces back to ancient Greece.

The Agora of Athens in Greece was the center cultural gathering place where artistic, spiritual, and athletic persons and activists assembled to expound on their ideas; great philosophers such as Socrates, Plato and Aristotle gathered there, according to Ugalde.

Inspired by these ancient aspects, “Agora’s Light” represents aspects of Agora, and reveal the aurora of the structure.

“With this in mind, the trio of sculptures represents allegorically the spirit of that place and time,” according to Ugalde. “They harken back to relics and ancient ruins, yet also relate to the present.” 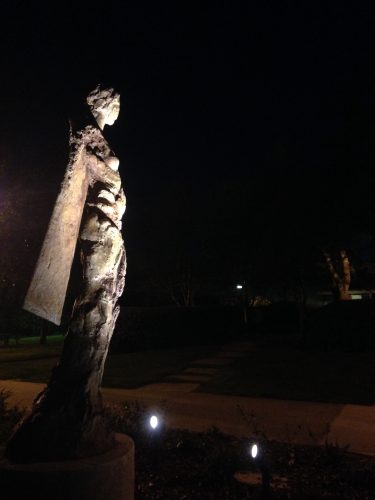 Light installations spotlight the figurative sculptures at night, as shown above. (Photo by Lidiya Grib)

Each female angel figure is meant to “exclude the classic form of beauty and èlan,” added Ugalde. This explains their hollow yet graceful forms that invokes perplexity.

Ugalde explains the differences of the figures and their significance: the first figure conceived as a dancer in graceful repose, representing the artistic and spiritual.

The second brings to mind the Winged Nike, the goddess of victory. The third signifies activist engagement with her extended hand to elicit discourse with those who have reached out.

The shapes and forms of the figures were depicted from observing a professional dancer in order to translate the poses into a compelling figure for the sculptures.

Made from cement, the sculptures stand at 8 feet in length on a low concrete pedestal. At night, light installations shed light on their figures.

Be the first to comment on "Figurative angel sculptures, “Agora’s Light” revealed"