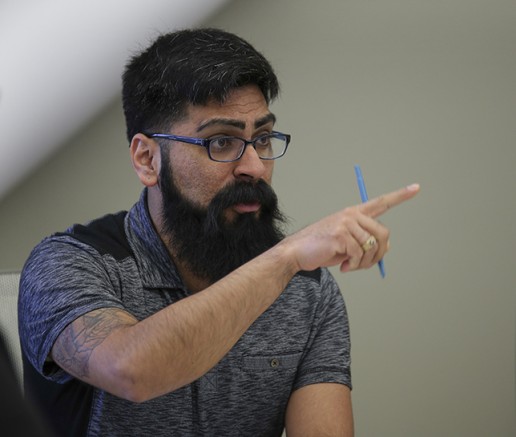 Advisor Juan Blanco talks about the agenda during the CAEB meeting on Feb. 23, 2016 at American River College. CAEB decided on a 'Super Heroes vs. Super Villains' theme for next month's Club Day. (Photo by Kyle Elsasser)

Next month’s Club Day, the Pre-Pharmacy Club grant, and upcoming campus events were among the topics discussed at Tuesday’s Club and Events Board (CAEB) meeting.

Director of Communications Bruce Rand motioned to make ‘Super Heroes vs. Super Villains’ the theme. The motion was passed 10-3.

“We (CAEB) can be the villains and and they (ARC clubs) can be the heroes,” Rand said. “Each club can design a hero and it can be a part of the club contest.”

There was enthusiasm from most board and club members on the decision.

“I’m glad that we finally made a decision, now we can work toward the event,” CAEB president Justin Nicholson said.

The clubs in attendance were also asked to design a superhero related to their club in accordance with the theme selection.

CAEB passed a bill granting the Pre-Pharmacy Club $150 toward promotional ideas and supplies.

Pre-Pharmacy Club secretary Raul Rastaman was present at the meeting to advocate the bill.

“We need the money, I’m happy it was granted,” Rastaman said.

Board members advocated these events and suggested participation from everyone.

A representative from the Phi Theta Kappa Honor Society was present and thanked CAEB for approving its grant at Thursday’s Senate meeting last week and shared a flyer with the board.

Be the first to comment on "Club Day and campus events discussed, one bill passed at CAEB meeting"