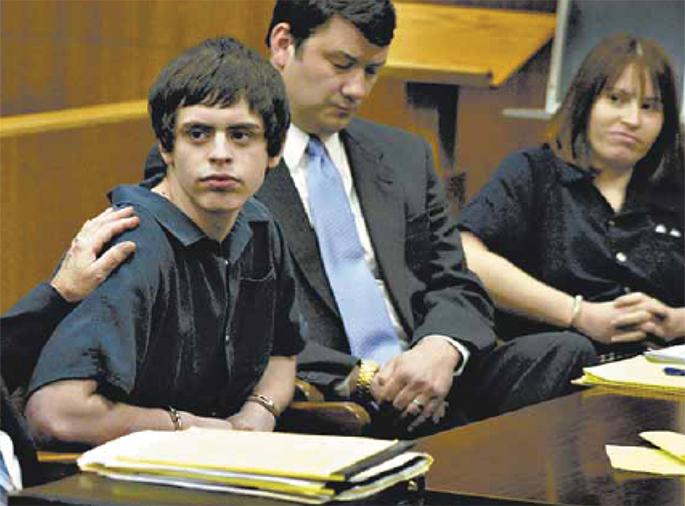 From left to right: Randy Maldonado, defense attorney Pete Smith and Wendy Maldonado in court in 2006.

atashaBlood drips everywhere. Screams and sirens can be heard in the background. That describes the night Aaron Maldonado was bludgeoned to death by his wife, Wendy, and son Randy.

Rewind 20 years and the history of the Maldonado family will show why Wendy made the choice to kill her husband.

Aaron and Wendy Maldonado met in their teenage years in Grants Pass, Ore., and married soon after. They had four sons: Randy, twins Marshall and Joshua, and the youngest, Tyler.

On a daily basis, Aaron would smash Wendy’s head into walls and punch her in the face, injuries that caused her to lose her teeth and require dentures.

He locked her outside in the snow naked, threatening to kill her family members one by one if she ever left him.

Wendy’s sons were also victims of child abuse by Aaron.

Child abuse happens when a parent or other adult causes serious physical or emotional harm to a child. Being constantly sad or angry, relationship problems, and acting out are all signs that a child is suffering from abuse.

Wendy’s children lived in constant fear that something small, like leaving the milk out, would set Aaron off into a rage.

“I remember when I was in preschool, I told my preschool teacher, ‘When I get older I am going to kill my dad,’” said Tyler Maldonado, the youngest of the four boys in the documentary “Every Fuckin’ Day of My Life.”

In the documentary, Tyler recalls an incident of abuse at the hands of Aaron.

“When I was eight, I went to my grandma’s house and me and some girl named Misty were throwing a snow globe back and forth and it hit the coffee table and it broke,” he said. “My dad took me outside with the snow globe and then he sat me in the yard and started yelling. Then a minute later he took the snow globe and threw it at me and hit me in the head. So I went inside a minute later and I noticed blood running down my head. Then I asked if I should cry.”

“It was scary to see Aaron hit Randy because he was the biggest out of all of us, and I knew if he could hurt him then he could kill all of us,” said Tyler.

The neighbors heard the abuse Wendy and her children went through,  and even called the police, but Wendy didn’t want to press charges.

“I would have to think ‘if they take him to jail he will only be in there for 2 weeks max.’ And when he gets out he would be even more upset,” Wendy said in a phone interview from the Coffee Creek Correctional Facility.

Wendy told her oldest son Randy, “I’m going to do it” – kill Aaron – but didn’t want Randy to go with her into the bedroom where Aaron slept.

Randy replied, “I can’t let you go in there. If something happened, I would feel like shit.”

Randy and his mother went in the kitchen by the table and began to pray. Randy then went to his brothers’ room and watched them sleep.

Afterwards, armed with a hammer and hatchet, mother and son set out for the bedroom where an unsuspecting Aaron lay asleep.

With each one standing on either side of Aaron, Randy asked his mother once more, “Are you sure?”

“Yes,” she mouthed back to him.

Quickly after that, Wendy took the first swing. Randy followed suit. They hit Aaron in the head repeatedly until Wendy yelled, “Stop!”

Moments later she ran out of the room to inform the authorities of the crime she had just committed.

“Everyone told me ‘there is no way a jury will convict you,’” said Wendy. “I appreciated everyone’s kindness, but I couldn’t take a chance in my son getting 25 to life”

The brothers were relived after Aaron’s death.

“I remember my brother Randy would always sleep on top of the blanket with his shoes on,” said Tyler. “The day after the (incident) was my first time seeing him in the bed taking a nap.”

According to domesticviolencestatistics.org, up to 10 million children witness some form of domestic violence every year.

Dr. Frank Stass, psychiatrist at Heritage Oaks Hospital in Sacramento, Calif., gave insight to what “red flags” to look for and the reasons women may stay in an abusive relationship.

“If your self-esteem is low and you feel like you’re lucky if you get anybody to be interested in you, then you lower the bar, and more importantly, you’re not hearing the things that are being said,” said Stass.

Abusers can prey on women who think they are unattractive and will be happy with any attention at all. Not all women that get abused are housewives or women who can’t provide for themselves.

According to Dr. Stass, financial stability and the way men apologize can affect a women’s decision to stay in an abusive relationship.

Stass recalled a woman that lived in San Jose. She was stable in all aspects (financially, mentally, living conditions), but she still stayed with her abuser.

Many women stay in relationships because they fear their children will resent them for leaving their father. However, there are many effects children can have after seeing abuse in the home.

Post Traumatic Stress Disorder (PTSD) can cause  flashbacks of the events, and getting the chronology of the event in the wrong order on children.

Children ages 12-18 can show impulsive and aggressive behavior, which can be a direct effect from the trauma. In some instances, the symptoms go away after a few months, but some children show lifelong effects.

Domestic violence isn’t just one
person hitting another. According to courts.ca.gov, it can be sexual assault, making someone afraid that they will
be seriously hurt, threats to harm someone, harassment, stalking, disturbing one’s peace or destroying one’s personal property.

One place that offers help in the Sacramento area is Women Escaping a Violent Environment (WEAVE), which is the primary provider of crisis intervention services for survivors of domestic violence and sexual assault in Sacramento County.

The WEAVE program has helped many victims leave their abusers and given them hope for change.

Julie Obheart, director of development and community relations of WEAVE, explains the importance of the WEAVE center and the services they offer. “It has been around for 36 years, we are the only rape and sexual assault crisis center (in Sacramento),” she said.

The safe houses at the WEAVE program have 91 beds across 18 suits for families.

“The goal is to never have the families share a room versus the 12 families in (the) one room that we used to have,” said Obheart. “We also have group counseling and children counseling held at the safe house.”

There is a charter school on the grounds that is taught by a certified teacher.

“We found that typically the abusers will go anywhere that is predictable. Doctor’s appointments, etc. … the most common place is the school. Abusers would try to go and take the children,” said Obheart.

According to Obheart, young boys are often turned away from shelters, but at the WEAVE center, boys up to age 18 can come with their parent to these shelters.

“A lot of the time these boys will have a shameful guilt because they didn’t protect their mothers,” said Obheart.

Obheart explains why some children may get into an abuse relationship and not realize it. “If they haven’t seen a healthy relationship, they don’t know what one looks like and there is no point of reference.”

According to ncdav.org, an estimated 1.3 million women are victims of physical assault by an intimate partner each year. Boys who witness domestic violence are twice as likely to abuse their own partners and children when they become adults.

The following is the transcript of Wendy Maldonado’s 911 call after the incident:

Dispatcher: OK, what kind of help?

Wendy: I just killed my husband.

Wendy: I fucking hit him in the head with a hammer.

Dispatcher: OK where’re you at?

Dispatcher: OK. I need you to calm down so I can help you, OK? You hit him over the head?

Dispatcher: Is he conscious?

Dispatcher: Is he conscious, are his eyes awake?

Dispatcher: OK. Don’t yell at me, OK? What’s your name?

Dispatcher: Where is your hammer right now, sweetie?

Wendy: In my hand.

Dispatcher: Wendy take a breath, OK? Just take a breath and stay with me. We’re gonna work through this and get you help, OK? Are your sons OK? You have four sons, did you say?

Dispatcher: OK. Good. Wendy? Is he bleeding from the head?

Wendy: Yes! His head is caved in.

Dispatcher: OK, you caved it in. OK. Alright. What’s his name? I haven’t even asked you. What’s your husband’s name?

Dispatcher: OK. What happened? Did he try to hurt you or anything?

Wendy: Every fucking day of my life.

5 Comments on "A hammer, a hatchet and a lifeless body"