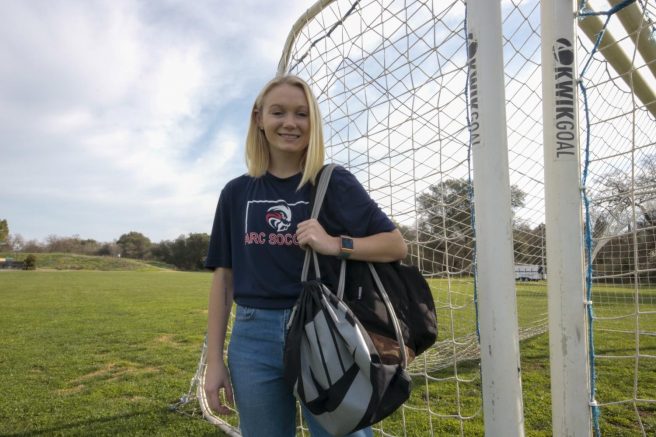 Attempting to earn a degree has never been easy, no matter what school you are attending. Trying to balance your classes and retain a decent personal life can sometimes be challenging.

That said, some students take it upon themselves to play collegiate sports on top of their schedules to be a part of something bigger than themselves.

The workload can be a challenge, though it is all about balancing your time according to Haley Norlie of the women’s soccer team. Norlie is the team’s center back and plans to major in Kinesiology. She says that you need to sacrifice personal activities to make time for her schoolwork.

“School and soccer are both demanding,” Norlie says. “You have to set your priorities and can’t be caught slacking in either.”

Soccer isn’t the only sport where people feel like their time is extremely limited. Maiya Evans is majoring in communications and is on the American River College track and field team.

“Balancing time and homework can be challenging,” Evans says. “It’s hard to balance time with friends and family as well due to my impacted schedule.”

But according to Norlie it is all worth it despite the challenges. Playing with people who care as much about the success of the team as she does allows for her to feel part of something bigger than herself.

“I love the challenge of playing hard teams and I love how everyone on the team wants what’s best for the team.” Norlie explains. “I love wearing my gear around campus and supporting ARC by playing for them.”

Being on a collegiate team isn’t all about playing in the big games. Most days players are in practice, which can run two or three hours a day. This causes students like Norlie to have to adjust their schedules to fit around the long practices.

“My classes are early because I needed to plan them around my soccer schedule so I’m always at ARC,” Norlie says.

When it comes to what is most important to stay on track, both Norlie and Evans said you must manage your time effectively and never let yourself get too overwhelmed. Some tips they gave were to prioritize your most important tasks and come to the realization that you can’t do everything in a day.

Being a student in the higher education system isn’t easy, so attempting to be a student athlete is one of the harder things someone can do. So when you’re at your next ARC sporting event, appreciate the effort that was put in to make that game possible.

Dylan Lillie is a second semester communications major at American River College. This is his first semester on the Current. Lillie aspires to continue his education at the University of California, Santa Barbara and become a sports broadcaster or sports journalist.

The bridge of beaver spirit

Be the first to comment on "The challenging, yet rewarding life of student athletes"