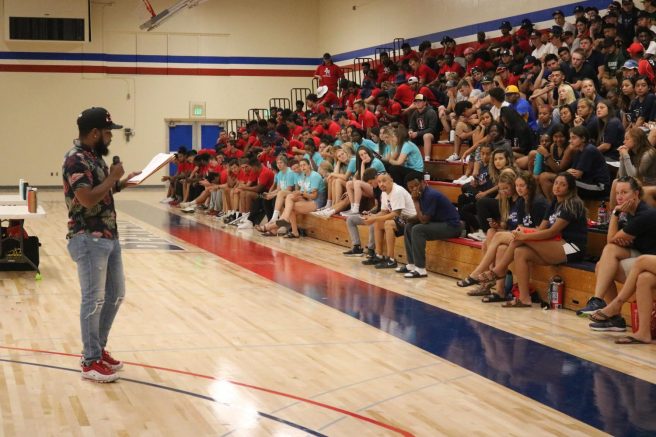 On Friday Aug. 30, student athletes at American River College were honored by the athletic department for their achievements during the previous academic year, in anticipation of the upcoming fall sports season.

Student personnel assistant for the Dusty Baker Student-Athlete Resource Center, Olga Prizhbilov, was tasked with setting up the event for the athletes in the main gymnasium. The rally also included a friendly cup-stacking competition to bring a little more fun into the mix.

“This event is our preseason rally to get all of the athletes excited about the fall sports season and to celebrate the accomplishments of the spring sports teams,” Prizhbilov said. “It’s also for celebrating our scholar athletes. These are student athletes who had a 3.0 GPA or above in the previous semester.”

Kelvin Burt, instructional assistant at the Dusty Baker Center, was invited by Prizhbilov to host the rally. For Burt, this event is about recognizing the importance of being a student before being an athlete.

“I came here because I felt that there was a need to support our student athletes, get them transferred, maintain their GPA, and really get them in the mindset of putting their academics first,” Burt said. “It’s about being known as a student athlete, not just an athlete.”

The caucus system fails to deliver