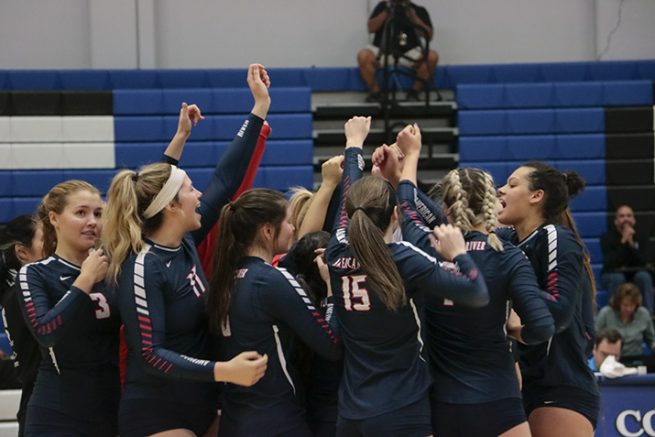 The American River College volleyball team celebrates their 3-1 win against El Camino College in the quaterfinals of the CCCAA State Chmpionship tournament at Solano College on Nov. 30, 2018. ARC moved on to place first in the tournament. (Photo by Jennah Booth)

For the first time in the team’s history, the American River College’s women’s volleyball team took first place in the California Community College Athletics Association State Championships over Fresno City College, 3-2 on Dec. 2. The team finished with 60 kills out of 166 attempts with a .187 kill percentage and only 29 errors.

It is the first time in CCCAA State Championship history that two schools from northern California have faced off in the tournament’s 42-year history. With ARC winning the first set, they dropped the next two to make it, yet again, another come from behind win against Fresno City (25-18, 23-25, 17-25, 26-24, 15-8).

El Camino started off hot as they scored four points straight away to jump to an early lead, before ARC used its first timeout after being down 8-2. El Camino continued its hot streak after a string of errors by ARC, followed by points from El Camino, leading them to win the first set by a blowout of 25-11. 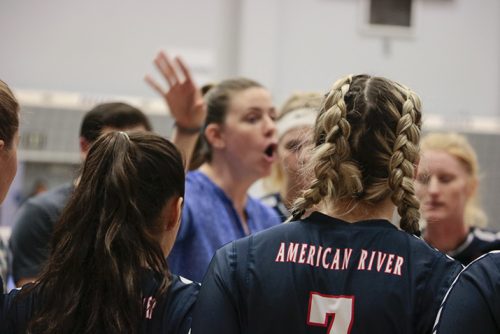 American River Volleyball head coach Carson Lowden tries to regroup the team after a slow start against El Camino College in the quarterfinals of the CCCAA State Championship Tournament at Solano College on Nov. 30, 2018. ARC came back to win the match, 3-1 and continued on to place first in the tournament. (Photo by Jennah Booth)

El Camino cooled off from there as ARC completed nine straight points to start the second set.

After some attacking errors and missed opportunities by ARC, El Camino crawled back to take the lead at 18-17. However, that didn’t last long as momentum shifted back to ARC to re-take the lead 19-18 and to win the second set, 25-22, tying up the match, 1-1.

Head Coach Carson Lowden talked about what the team could do better going into the upcoming matches of the tournament.

“Outside of starting shaky and a little tentative, I think we did a really good job of errors, our attacking errors, is something in that first set that really reared its ugly head,” Lowden said. “Of course we got much better as the match went along, but that’s something we’ll talk about and how we can stay a little more patient offensively in order to keep those balls in play when we’re not going for the kill.”

The third set stayed close throughout as both teams fought for the lead. The biggest lead ARC had in this set was only by four. ARC also started a 6-0 run just in time, down 18-15, to take the lead and finish El Camino off, same as the second set, 25-22. ARC took the lead in the match, 2-1. 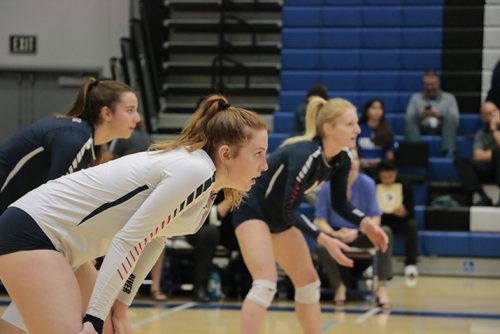 (From left to right) Lily Joghnson, team captain Madeline Adams and Andreia Keane prepare for a serve from El Camino College during the quarterfinals of the CCCAA State Championship Tournament on Nov. 30, 2018. ARC won the match, 3-1 and went on to place first in the state. (Photo by Jennah Booth)

Sophomore Savannah Smith had 10 digs and was a major contributor defensively for the team.

“Defensively, I think that we read the tips. Our game plan was — since they do a shift on their outside, we shifted for certain numbers, certain players and I think that paid off because we were ready for them,” Smith said.

The fourth and final set was another close battle between the two teams as ARC prevailed to take three straight sets over El Camino, to win the match 3-1 and to advance on in the tournament. In the final set, ARC had 17 kills with a percentage of .229 over El Camino’s .146.

Sophomore Lily Johnson led the team in the match with 15 kills while sophomore Maddie Adams had 25 digs.

Johnson said that she wanted to enjoy the moment the team was in, but also wanted to work on making noise early instead of coming back from behind.

“I think we can work on coming out stronger, we came out struggling a bit. But if we come out strong and stay strong, we’ll get these sets done in three games,” Johnson said.

Freshman Andreia Keane also had a successful game with four strikes and 12 kills. After the match Keane said that their coaches told them to give it their all and to not let down going into the next matches of the tournament.

“They just said that we made it this far so we got give it 100 percent and just keep fighting and keep working on our skills,” Keane said. 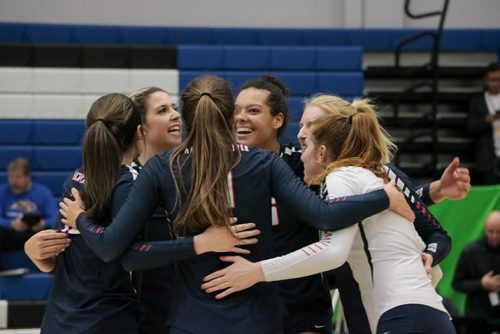 The American River College volleyball team celebrates a point against El Camino College during the quarterfinals of the CCCAA State Championships on Nov. 30, 2018 at Solano College. ARC won the match 3-1 and moved on to place first in the state. (Photo by Jennah Booth)

Johnson said the team seems to shine at the perfect moment.

“We saw the finish line and we knew that we tend to excel in the fifth set when the game goes to five,” Johnson said. “Our record shows that we are very good, we have the stamina to complete those games so when we won the fourth set we knew we were going to come out swinging pretty hard.”