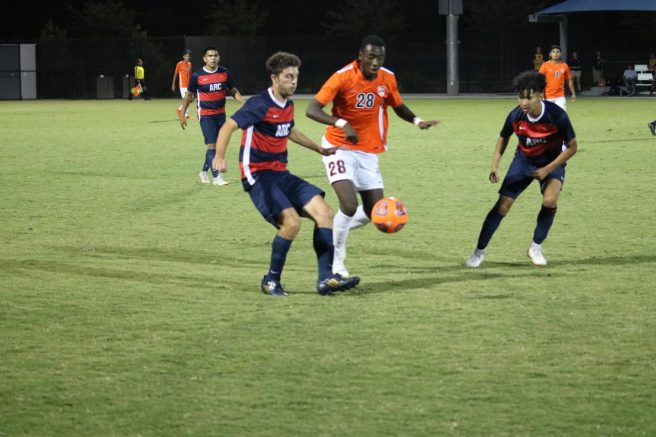 The match started with tough playing between both teams. The two teams communicated with their players to score a goal but failed by shooting two each side in the first half of the game.

According to the ARC head coach Paul Hansen, the game was easy and the team played well. Hansen says the ARC team was in the lead for a majority of the game.

“It has disappointed me, we were in the lead in 80 minutes, I think the team was pretty even,”  Hansen said. “We will take the result.”

The second half started with a good stand from ARC that resulted in a goal 56 minutes in to the game, which gave ARC the lead.

Joan Garcia, a forward, scored a goal for the team.

“The game was good at the end we just got a little bit tired,” Garcia said.

The teams played a tough competition to win, but ARC failed to keep the score in the last minutes of the game, and CRC recorded a goal that changed the result to a 1-1 tie.

“[The players] felt a little out of the energy towards the end, that was because the guys were tired,” Hansen said. “It’s frustrating, can’t change the calls you don’t get to get those back and we are looking forward to our next match and I was pleased with the guys today.”

Hansen also said he accepted the game become complicated at the end and that resulted in the team becoming tired. He is keeping his focus on future games to do better without bringing any changes to composition.

“We are not probably going to change our formation in the next game, we are happy the way our team is playing right now but obviously we need wins at this point,” Hansen said.

“We played with an experienced team,” Stoltenberg said.

He said he believes in his team’s capability to accept any future challenges.

“We played well, this definitely shows we can step up and rise to the challenge by a good quality team. It shows we have the talent we just need to insert in to our formation,” Stoltenberg said.

Finally, the game remained with the result 1-1 draw for both teams with the hope of doing better during the next games.

Be the first to comment on "Men’s soccer draws against CRC, 1-1"