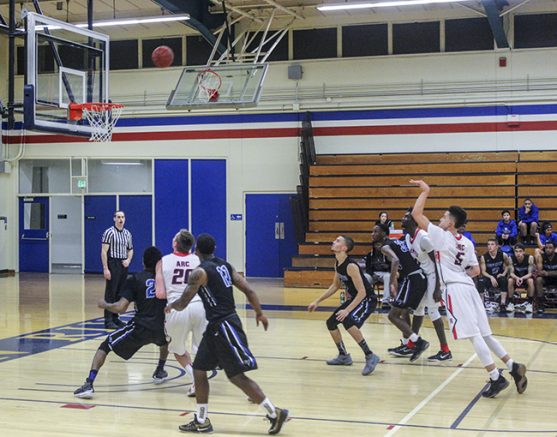 The American River College men’s basketball team lost 78-75 to Modesto Junior College on Feb. 9 after guard Lawrence Smith failed to sink an attempted three-pointer within the last few seconds of the game.

The game started off with the Beavers winning the jump ball and Smith scoring the first basket.

The Pirates had the advantage in the first half as a result of their full court press, which caused many turnovers for the Beavers. The Beavers were struggling offensively to successively answer back.

The Beavers ended their first half dragging behind thirteen points, with a score of 34-47.

Both teams started off the second half with high intensity and a goal of finishing out the game with a win.

The Pirates entered the second half with their same effective full court press against the Beavers, but this time the the team was able to perfect its press break.

“After constantly running it we kind of saw what was open, and what not to do just from the first half,” Smith said.

The score gap between the Pirates and the Beavers decreased as the Beavers worked well offensively and managed to get the Pirates down to a one point lead, with just one minute and 43 seconds left in the game (74-73).

A timeout was called by the Beavers as the Pirates brought the lead up to three points.

The Beavers inbounded, and began moving the ball around looking for an open shot. The clock decreased in seconds until finally Smith managed to get an attempted three point shot off, but missed.

Smith squatted down, in the middle of the court, in disbelief as the Pirates celebrated their three point victory.

The Beavers have two more games left to finish the season off and the players are gearing up for their next opponent, San Joaquin Delta College on February 13.

“We’re going to follow coach’s game plan and try to execute it to the best of our ability, and hopefully we can come out with these last two wins,” Smith said.

Club Day scares up some fun