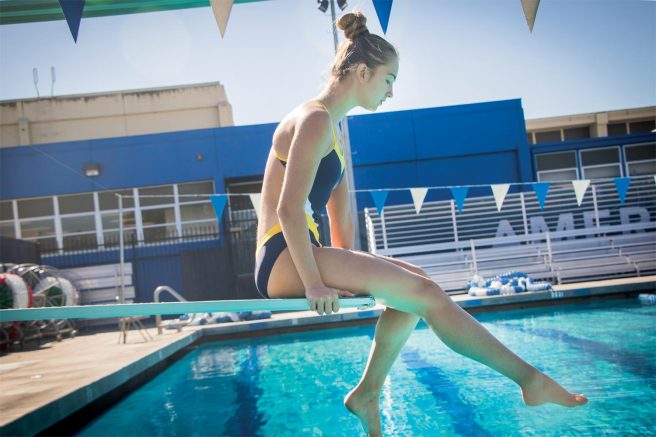 Juliana Shim sits on the edge of a diving board at American River College. Shim is a first-semester student at ARC. (Photo by Ashley Hayes-Stone)

Juliana Shim lifts herself from the water, and begins to walk along the edge of the pool. She has just done a flip off of the high dive at American River College and is walking the short distance to to the smaller diving board. Shim is been alternating between the two, practicing dives and flips, over and over until they are perfect. Her coach Dede Crayne stands to the side yelling encouragements and constructive criticisms.

Shim is taking the Swimming and Diving class at ARC, but this is not the only class that occupies Shim’s time, she is currently enrolled in 20 units, and it’s only her first semester.

The idea to take the class Shim said, originated from her job.

“I was very excited when she came out because she has a lot of talent, and a great form and great body control, I was like ‘yes! I have found my latest super star’ then a little ways in I realized she was very scared of everything,” -Dede Crayne.

“At my work I was a lifeguard, and they had a diving board and in my free time I would just like to jump off of it and do flips,” Shim said, “ I knew I would be really bad at it but I wanted to try it.”

However thanks to her gymnastic back ground, Shim was anything but ‘bad’.

“I was very excited when she came out because she has a lot of talent, and a great form and great body control, I was like ‘yes! I have found my latest super star’ then a little ways in I realized she was very scared of everything,” said her coach Crayne.

Shim said that she tends to be a very cautious person, but it was not always a good thing, Shim said being so cautious prevents her from improvement. 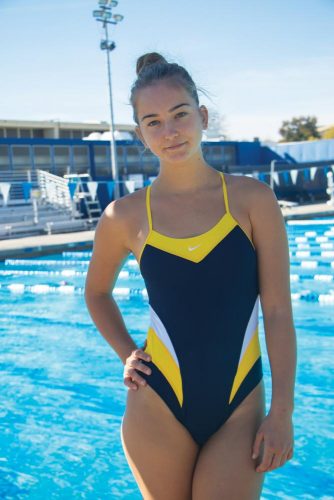 “My coach Dede says I have so much potential especially with my gymnastics background.

I’m just scared, I doubt myself,” Shim said, “I’m starting to be more and more braver, which is good.”

Constantly having to try new moves off the diving board has helped Shim gain some confidence in herself, said Crayne.

“I feel like I have improved a lot throughout the semester, especially last week I got three new skills in one day,” Shim said.

However as Crayne is discovering, sometimes we learn a few things from surprising sources.

“She has taught me a lot, I’ve had to be patient and adjust my coaching style to her,” Crayne said, “She is starting to figure out how to overcome her fear, and trust that when i tell her a way to do something that she will be okay.”

Nevertheless Crayne just wishes for Shims success, and hopes that Shim will consider joining the swimming and diving team in the spring.

“I love her as a person I didn’t want to lose her to fear,” Crayne said, “You can see when she finally does something she smiles and lights up and can’t wait to tell her mom.”

Shim attended River City High School where she graduated early at the age of 16, “If I have a chance to not be there and save time then I will take that chance,” Shim said.

She has gone on to taking a similar approach to her college career.

Shim is going currently studying psychology, but that is not her end goal. “ I just need the [Psychology] degree to be a midwife, she said.

Shim explained that to be a midwife a student must shadow a midwife for a certain amount of time, but to do that the student must first have a degree. “A midwife told me that she prefers if i have a bachelor’s in psychology or women’s studies,” Shim said, “ I chose psychology because its more broad and you can have a Plan B.”

This has been a long term career choice for Shim.

“When I was in seventh grade I knew I was going to be a midwife, I didn’t even know what it was called,” Shim said, “I want to assist in giving birth, I feel like it’s really beautiful and like a miracle bringing life to the world.”

Shim said she tried to explore other options, but always came back to being a midwife.

Shim is currently working two jobs and planning on taking 22 to 24 next semester, so she can transfer to Sacramento State as soon as possible.

Be the first to comment on "Teenager dives into collegiate athletics"