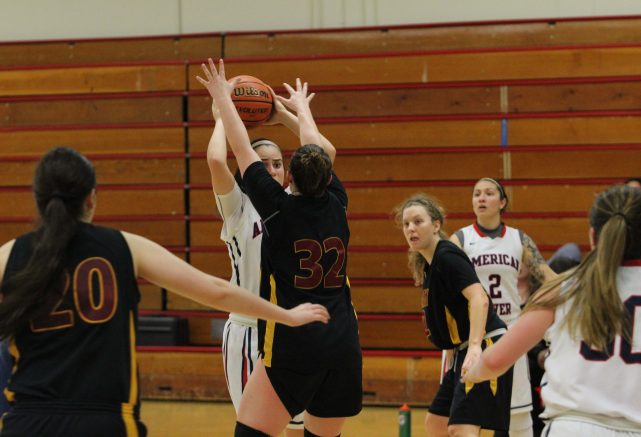 Freshman forward Bengu Atik was the lead scorer with 26 points and freshman point guard Deja Samuels was not far behind, scoring 23 points for the Beavers.

A fast pace was set at the beginning by ARC—within the first two minutes the Beavers scored five points.

Sophomore corner Kimberly Schupp sat out the game because of an injury but said that it did not deter her from being happy for her teammates.

“I was happy to see them win,”  Schupp said. “It wasn’t hard sitting on the bench watching them win.”

Based on the end score, it was clear that ARC outplayed SCC, but beyond skills, a lot of that can be attributed to the athlete’s strong chemistry.

“Our team chemistry has definitely improved,” Schupp said. “We play for each other.”

The comradery of the team and its teamsmanship was also recognized by freshman point guard Deja Samuels.

“Our team chemistry has helped with the defense,” Samuels said, adding that “it was a good win.”

Next up for the Beavers are the playoffs; who and when the team will play has yet to be announced.

Schupp, Samuels and Coach J.R. Matsunami all agreed that Sierra College has been among one of team’s biggest competitors this season.

Schupp and Samuels said the ARC and SCC teams are evenly matched.

“In the playoffs we will just keep improving and beat [City College],” and “getting to the final, really our goal is to get there,” Matsunami said

In order to beat SC and whoever else comes its way ARC must have some advantages and Matsunami pointed out a few.

Matsunami added some of the Beavers’ biggest advantages are that ARC has the best backcourt and biggest guard play in Northern California.
The women’s next game has yet to be announced.