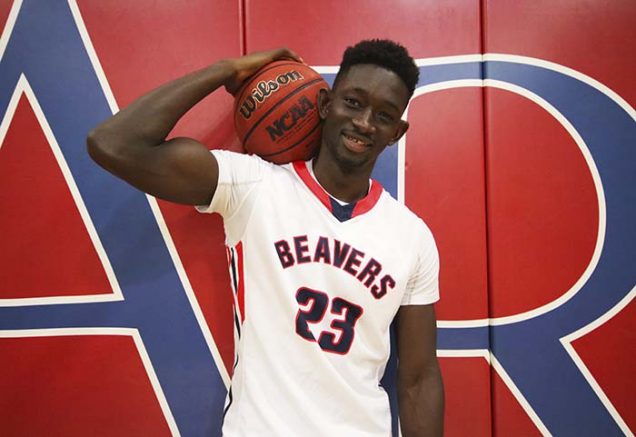 Freshman Wing Baidi Kamagate holds a basketball in front of an ARC sign in the small gym. Kamagate said that his mother and father have been a huge influence on his life and supported him in his decision to move from Africa to America on his own. (Photo by Cheyenne Drury)

Also Kamagate has not been living in Sacramento for the past three years but rather Vallejo, CA.

Baidi Kamagate has an exuberant perspective on life by trying to think with a positive ideal, which has gained attention with his peers at the American River College campus, especially from the Dusty Baker Center.

Kamagate says he enjoyed playing basketball in high school, since his move from New Guinea to America the difficulty for Kamagate was learning how to adapt to a new language.

Kamagate had found out that he enjoyed playing basketball at St. Patrick’s Catholic Church in Oakland.

Now Kamagate is a 6’ 5” freshman and plays forward for the ARC basketball team and enjoys being a student.

“It’s a great experience to be at college,” Kamagate said.

According to Mary Svityashchuk who works at the Dusty Baker Center which is known for helping student-athletes achieve their academic goals, Svityashchuk says Kamagate is highly liked and even helps with designing posters.

Kamagate said that he likes to go the California Family Fitness gym because it gives him a feeling of enthusiasm to be inside an environment where he can channel his emotions after having a rough game.

“I feel like when I do a bad game or I’m stressed I go the gym,” Kamagate said. “If you catch me at the gym you’re my best friend.”

The transition from playing in high school to college could be overwhelming for anyone, but

Kamagate says that because he is not a native born American it makes the situation more difficult.

However, Kamagate is all about enjoying life and living it to the fullest.

Kamagate said that he had been living here in Sacramento for three years since 2014.

Kamagate said he plans on staying here in the United States and that although he loves his mom and dad, he likes being able to live on his own.

“They don’t need to worry because it’s a blessing for me to be here,” Kamagate said. “My mom guides me along with my choices to respect each other and listen to other people, don’t be selfish.”

Kamagate was born in Guinea, West Africa on his mother’s side of the family.

Kamagate said that his mother and father have been a huge influence on his life and supported him in his decision to move from Africa to America on his own.

When he first arrived in the United States, Kamagate said he found it difficult to speak English since his first language is French.

“It was so hard to speak to people,” Kamagate said. “I learned from TV shows on how to speak.”

Kamagate jokes that when he first moved here Google Translate was his best friend.

While being a stranger to a new land and trying to learn a new language can be a challenge to some, Kamagate says he see’s himself as a positive person.

Kamagate said he feels that his outlook on life comes from his dad’s strict personality where he believes in appreciating what life can give you.

“My dad always said you can buy everything you want but you can never buy life and experience,” Kamagate said.

Kamagate said he wants to help others to feel a positive benefit in life.

As part of this effort, Kamagate works at ARC with students who are a part of the Disabled Students Program & Services in working out with physical exercise.

Kamagate said he likes to joke around with friends, laugh, and have a good time while he talks a lot about food with his friends.