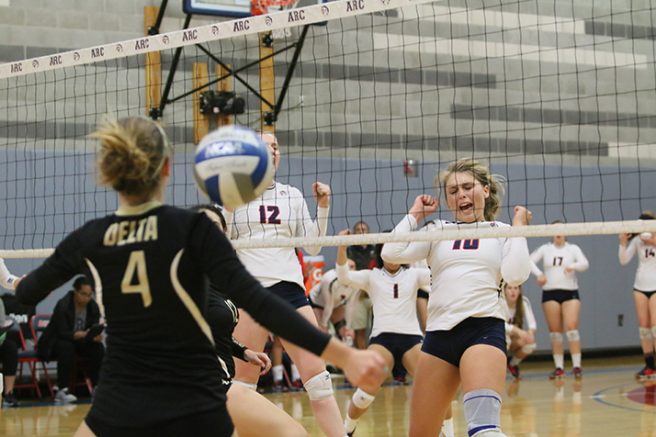 ARC vollyball players Erin Fogarty and Kaitlin Meyer rush for the ball during a game against San Joaquin Delta College on Nov. 9, 2016. (Photo by Lidya Grib)

The American River volleyball team got even with San Joaquin Delta (SJD) by dominating them in straight sets on Wednesday.

At their last meeting, American River lost a close match in full sets, 3-2, to the Mustangs.

Coach Carson Lowden said the win against a team that has beaten them felt “real good” but that the most exciting thing was to see the team execute at a high level.

Having played SJD before, they were confident coming into tonight’s match and knew they would have to execute to get the win.

“We take a lot of pride in defending our home gym,” Lowden said.

The Beavers started the first set strong coming out with 5-2 lead after some well placed shots by Kaitlin Meyer to the backcourt of San Joaquin Delta.

Meyers had a strong shot blocked by two Mustangs which tied the first set at 6.

Despite some solid digs and well placed shots, the Beavers made small mistakes which kept the score close in the first set. After a Mustang timeout, the score was 14-10 in favor of ARC.

Strong play from the front line late in the set forced the Mustangs to take their second timeout with ARC leading 19-14 in the first set.  After the timeout, ARC stayed focused, taking the first set, 25-15. 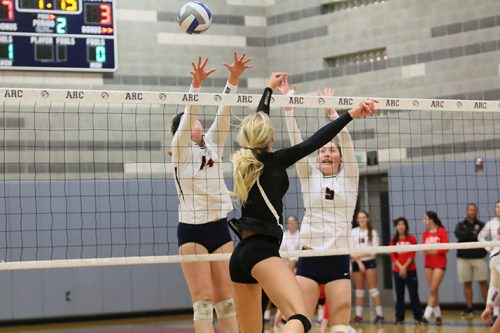 In the second set, ARC held a small lead over San Joaquin Delta all the way to the end. Every time the Mustangs brought the match within a point or two, the Beavers would begin to pull away only to see the lead dwindle again.

Middle blocker Sammie Naake and outside hitters Dani Schoen and Madison Hunziker continued their dominance over San Joaquin Delta as the Beavers jumped out to a 8-4 lead in the second set.

The Mustangs were on the heels of ARC bringing the score within a point at 15-14 after Schoen had a shot blocked that brought in the middle of the second set.

Late in the second set, the Beavers saw a five point lead quickly vanish as the Mustangs again pulled within a point. With the score 24-23, the Beavers took a timeout.

After the timeout, ARC focused and finished off the Mustangs in the second set 25-23.

Meyer returned her own blocked shot in the third set which helped lift ARC to a commanding 9-3 lead early in the third.

With momentum in their favor, the Beavers continued rolling, leading by as much as nine points in the third set.

While the Mustangs didn’t go quietly, making a late surge bringing the set back to within a point, the strong play of Meyer and Schoen on the front line proved too much as the Beavers went on to win 25-21, winning the match in straight sets.

“The drive to put the ball down is what keeps us going,” Meyer said after the game.

Schoen said it felt good to get the win against SJD.

“I think we deserved it,” Schoen said. “We’ve improved our game.”

Meyer said that the previous loss motivated the “everyone” to get the win and that the team is beginning to peak.

“We’ll take as much momentum as possible going into the playoffs,” Meyer said.

The Beavers are now 16-8 on the season but with the playoffs right around the corner, they have a big game on Friday against Folsom Lake.