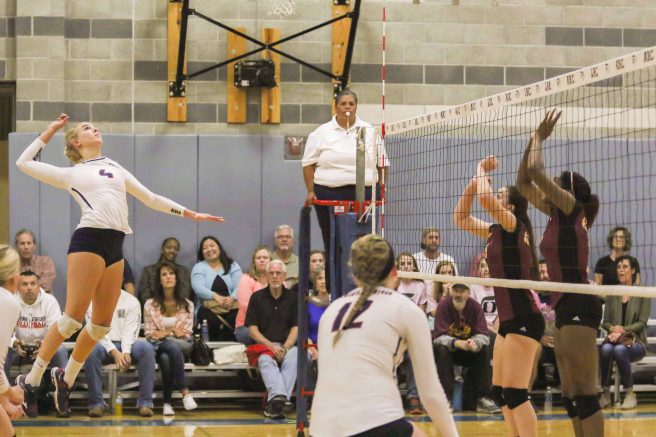 Outside Hitter Dani Schoen gets ready to spike the ball during the Dig Pink game against Sacramento City College on Oct. 19. Arc lost 3-1. (Photo by Laodicea Broadway)

At the Dig Pink game for breast cancer awareness, the volleyball team suffered a tough loss to Sacramento City College on Friday, ending their three-game win streak and dropping them to 12-8 on the season.

ARC partnered with The Side-Out Foundation and its Dig Pink initiative to raise $500 towards clinical trials for women with stage four breast cancer.

The volleyball team had shirts on the bench that said #TeamAli on the back, a reference to Ali Osterhout, wife of football coach Jon Osterhout, who is a breast cancer survivor.

Jon Osterhout thought the game and its message was one that needed to be shared, calling it “an unbelieveable cause” and great for raising awareness in the region.

“It was unbelievable,” Osterhout said. “What the volleyball program did and the administration’s help and support for my wife was incredible.”

Middle blocker Erin Fogarty said the support the team got from the community was great.

As far as the gameplay, Coach Carson Lowden identified blocking as one of the team’s problems of the game.

“We need to go to work on our blocking, our blocking needs to be better,” Lowden said. “Not necessarily that we need to get more blocks, but take away the correct space on the court.”

The game was a defensive battle for both sides as neither was able to firmly establish themselves in the first set with Sac City taking a slight lead.

After a timeout, the Panthers were able to just hold off the Beavers and win the first set 25-22.

Fogarty said while the team put up a good fight, there are areas to work on.

“It was a really good fight, Sac City is a really good team,” Fogarty said. “I think there are a few things we need to work on but overall, it was a well fought game.”

The second set started off badly for ARC as Sac City was able to score 6 consecutive points to start the set, pulling out to a 12-1 lead before a timeout.

The Beavers were able to close the gap to within five points before Sac City took the set 25-17.

ARC came out much more composed and ready to play in the third set, eeking out a slight lead of three points at 14-11.

The Beavers were able to snatch the third set away from Sac City with a score of 25-19 to keep the game alive and force a fourth set.

Serving errors and finishes at the net contributed to ARC’s slow start to the fourth set, allowing Sac City a lead by as many as nine points.

With Sac City needing only one more point to win the game, the Beavers started a furious comeback attempt, scoring six consecutive points and cutting the lead down to three, before Sac City was able to lock away the final point, 25-21.

Lowden said that despite the loss, the team’s outlook on the season remains positive.

“Certainly not the result we we’re looking for, but we have a lot of volleyball left to play,” Lowden said. “We want to take care of business against teams we (played) in the first half.”

“Nobody in the big 8 is a walkthrough, everybody shows up to play every night,” Lowden said.