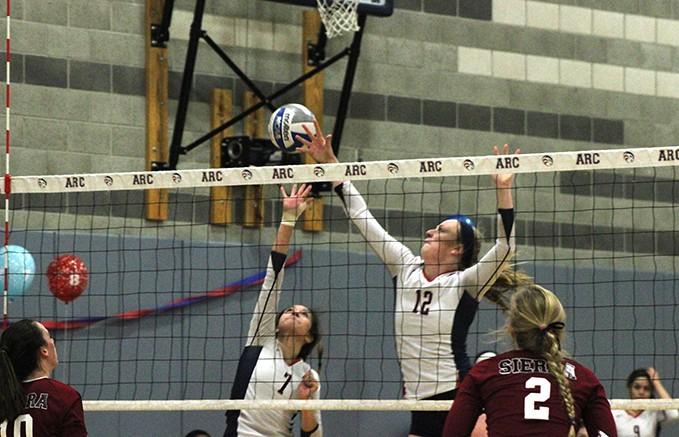 A whistle blown in the area of a net violation on match point during the fourth set extinguished a fiery comeback attempt from Erianna Williams and the rest of American River College’s Volleyball team in its 25-23, 25-21, 25-18, 25-21 loss to Sierra College.

ARC’s rally fell short after middle back Dani Schoen was called for hitter interference after a hit she ran into the net.

Had the play gone unpenalized, ARC would have scored and kept the match going.

ARC had won on a serve that clinched the first set by safety Monica Udahl.  ARC was down by as much as eight in a 2-1 hole in the fourth and final set.

Williams scored two of the last three points for ARC off of clean set ups for a spike.

“(We) knew that their big middle was back, so ball control was important,” said Jackson. “The girls served tough tonight.” 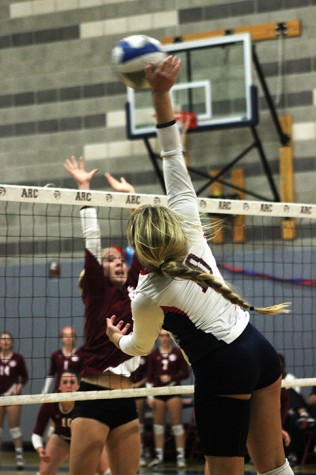 Sierra made life difficult for the bigs of ARC with about 60 digs, a third of which were contributed by Sierra left back Sarah Shively.

Sierra leads the Big 8 Conference (18-4) overall.  For ARC, the loss on Friday became only the second to occur at home. Besides Sierra, the team fell to Cabrillo College during a back-to-back between Cabrillo and Porterville College on Sept. 18.

“Wait and see,” said Williams on her approach of the remaining regular season games after the loss to Sierra. “(We) still have another game and other teams may have more, so there is still a shot (at the playoffs).”

Sierra began to pull away in set three after ARC allowed 16 kills. Williams addressed her defensive woes as a lack of communication, but felt the team got it together when it counted.

ARC will travel to Cosumnes River College on Wednesday at 6:30 pm in its final regular season game.

ARC coach Gabe Gardner declined to comment on the match.

Be the first to comment on "ARC flubs comeback against Sierra"