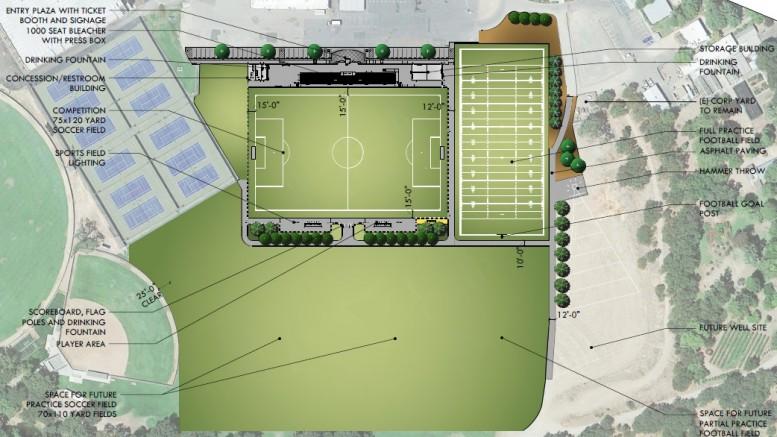 The contract to build the proposed athletic facilities shown in this rendering is currently being bid on by general contractors. Dean of Athletics Greg Warzecka hopes that construction will start in "early summer."

Update Aug. 24, 2015, 4:23 p.m.: The athletics department has since stated that construction of the new complex will begin during the fall 2015 semester.

The American River College athletics department will begin construction on a new complex in the “early summer,” according to Dean of Athletics Greg Warzecka.

The PE and Athletic Field Renovation Project is currently being prepared to be bid on by general contractors.

The project is scheduled to be completed in the fall of 2016 and construction costs are slated to not exceed $5.28 million

“(The money is) part of a LRCCD bond that was passed years ago,” said Warzecka. “It was the same bond that built the Student Center.”

The largest part of the project scheduled to be built is a 1,000-seat soccer stadium equipped with lights, a scoreboard and concession stands.

In addition to the stadium, the project includes new practice fields for the football team and soccer team, as well as a hammer cage for the track and field teams.

According to Warzecka, ARC is attempting to match the quality of the facilities at Cosumnes River College and Folsom Lake College, in what he said will be a “significant improvement,” over ARC’s current facilities.

“They’re antiquated,” said Arellanes. “We’ve been playing on the same field for the last 20 or 30 years.”

The new stadium could be used to host night games and other events, something Arellanes said “would be wonderful.”

“If this facility gets built the way we want to, there won’t be one like it Northern California and possibly the state,” said Arellanes.

Men’s soccer head coach Paul Hansen said he believes the new fields will create a much nicer environment for the fans.

“We haven’t had access to a bathroom or anything,” said Hansen. “We’ve been out there by the creek for 20 years with nowhere to go to the bathroom, nowhere for people to sit and watch the game.”