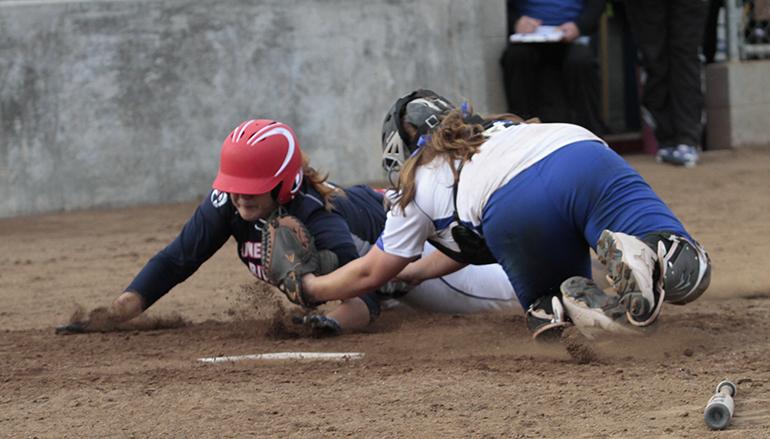 American River College’s softball team lost 10-6 Thursday, falling in its season opener at Solano Community College due in large part to poor fielding in the fourth and sixth innings, as Solano scored half of its runs in unearned fashion.

The game was back and forth from start to finish, but was error-filled throughout on the part of both teams.

For Albert, it was her first start in a college level game. According to Albert, she had torn her ACL three years ago, one day before she was scheduled to start what would have been her first college game ever for Sierra College.

“Yeah very,” Albert said of having nerves before the game started. “It was much easier after I got the first inning out of the way.”

“I was really happy with her performance,” said ARC head coach Lisa Delgado of Albert.

“(It was) decent for not playing in a college game for three years,” Albert said of her performance.

After a solid first inning, Albert allowed back-to-back home runs to Solano’s Ashley Dufresne and Brittany Jacobsen in the second.

Dufresne’s score eclipsed the scoreboard in left field with a runner on base, and Solano had taken a 3-1 lead by the end of the inning.

ARC quickly answered back, scoring three runs in the top of the third and taking the lead after a potential double play ball by ARC’s Darian Garnett was poorly fielded by Solano second baseman Jade Bactad, who flipped the ball for the put-out attempt but ended up having it land in shallow left field, making the score 4-3.

Solano tied the game in the bottom half of the inning, and took the lead in the fifth after catcher Stephanie Cello drew a bases loaded walk.

Albert nearly got ARC out of a jam only down one, but Dufresne hit the ball off the right field wall to score two more runs, making it 7-4 in favor of Solano.

Solano starter Denali Smith went five innings, and was replaced in the sixth by Alesia Selden.

ARC scored two in the top of the sixth to cut the deficit to one, and had the go-ahead runners on second and third base with two out before Selden got Garnett to fly out to left field.

Solano would score three more runs in the bottom half of the inning, capitalizing on critical errors by ARC to take a 10-6 lead into the seventh.

“(We have to) make the routine play,” said Delgado of the team’s defense.

“The defense killed us. Our routine (plays),” said Albert.

ARC finished with an overall record of 17-20 and 10-11 last season in Big Eight Conference play.

Delgado was to the point when asked about her expectations for her team this season.

“I’d like to see us get better every game,” she said. “And more timely hitting. We left a lot of baserunners in scoring position.”

Opinion: Rape is unacceptable, regardless of who you are