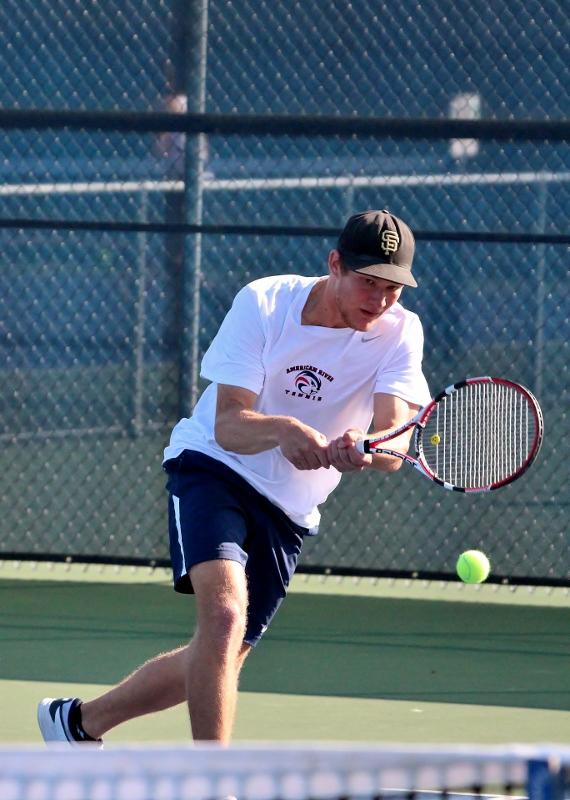 Simba Barratti stretches out to return a serve in his singles match versus Modesto Junior College player Xavier Lopez Feb. 12. Barratti went on to win the match (6-0, 6-0). (Photo by Emily K. Rabasto)

After showcasing a dominate performance in their first match of the season by beating Reedely College (7-2) the Northern California State ranked No. 3 American River College men’s tennis team took to the court to face Big 8 South rival Modesto Junior College on Feb. 12. The men’s team won all eight matches.

“We were supporting each other, we were fired up, we had energy and discipline it was a great combination,” head coach Bo Jabery-Madison said.

The Beavers started off strong capturing uplifting wins in the first three doubles matches. The pair of Andrew Amor and Adam Duong dominated the team of Alex Jackson and Xavier Lopez from Modesto (8-0).  Followed by Patrick Johnson and Kevin Valentine who beat Austin Tay and Rick Perso (8-3). The team of Simba Barratti and Charles LaSalle had a more trying doubles matching winning in 13 sets versus Esteban Felix and Freske Matthews (8-5).

“In doubles it’s important to come out with energy and dynamic, kind of an explosive game,” Jabery-Madison said.

All of ARCs singles victories were captured in straight sets led by Barratti who beat Modesto’s Lopez and Valentine who beat Tay in shutout victories (6-0, 6-0).

“My transitions have been really consistent and it’s been working,” Barratti said when asked about his effort. “I can’t tell you how consistency effects your game it can put you in a match and help you win.”

The rest of the singles matches were evenly matched ARCs No. 1 Amor faced off versus Modesto ace Jackson in a grueling first set that saw control of the match switch between the two Amor held on to win the set (7-5) the second set saw Amor grasp control and win (6-4).  The rest of the singles matches saw Duong face Luis Velazquez and beat him (6-2, 6-3) and Johnson beat Felix (6-3, 6-3).

Overall the team came out with momentum and a competitive nature that Jabery-Madison notices is improving as the season continues on.

“Even when things weren’t going well we still came with that positive energy and kind of got through the rough patches,” Jabery-Madison said. “There was a definite improvement over last week’s matches there is still a lot of room to improve though.”

Be the first to comment on "Modesto hits Beavers’ dam"