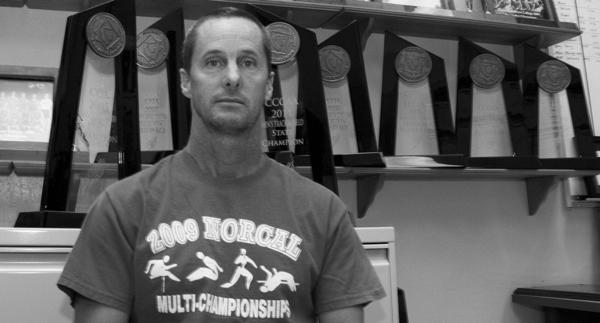 Coach Rick Anderson stands in front of the many trophies won over the years. (Photo by Bryce Fraser)

For over a decade and counting, Coach Rick Anderson and the men’s cross-country team have set the standard for American River College sports.

Coming off a routine season last year finishing second in the state, the cross-country squad expects nothing less for the upcoming season. “We expect to win it all,” said 16-year coach Anderson. “This year, I feel no one can touch us.”

With four returning athletes, including Garrett Seawell, who placed fourth in state last year, they hope to continue their winning tradition this season. Improved depth and being at the same pace as they were at the end of last season should run in their favor.

“This year’s team is the best team I’ve ever had since I’ve been here,” said Anderson.

During a grueling summer, the team prepared by going to a running camp up in the mountains to train and bond, while throwing individual wants to the side for the better of the team.

Forming team unity is of utmost important to the program, which has served as the backbone of their success. In 2007, runner Nelson Mwangi, who’s now the assistant coach, sacrificed his personal accolades to help the team by using strategy.

He could have been the top runner in Northern California, but ended up finishing second so he could take the team with him to the Northern California title. He now brings that leadership to the coaching staff on their quest for a state title.

At times feeling slighted by the media, Anderson and his team are more concerned with how the school sees them.
“When we show up at meets, generally everyone knows how good we have been,” said Anderson. “We’re the favorites by a long shot.”

Despite the consistency through the years, ARC is still looking for that elusive state title since 2005, which San Bernadino has won the last four years.
“Hopefully we can win state and break San Bernadino’s streak. That would be awesome,” said Seawell.

ARC was able to get off on the right track Saturday at the Fresno Invitational, taking home first place. Four runners finished in the top five, led by Wyatt Landrum and Garrett Seawell who finished first and second respectively.   The Beavers look to continue their momentum on Sep. 17 at the Beaver Invitational.