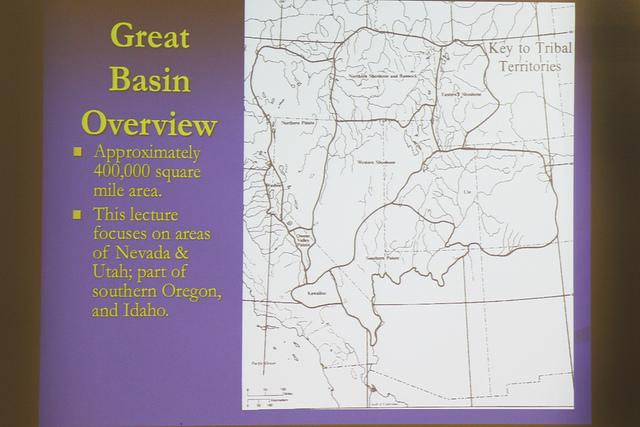 A slide on the Great Baisn Overview at the college hour that covered the troubles that the Native American tribes went though in the 1800s on Nov. 5. (Photo By Emily Thompson)

The struggles of the descendants of the Wada-Tika Northern Paiute of the former Malheur Indian Reservation in southeast Oregon were discussed at Thursday’s college hour.

“I like to talk about (the Native American tribes) because it gives them a voice that they don’t have,” said Susan Stowell, the host of the college hour.

The Malheur Indian Reservation was established in 1872 for homeless and landless Paiutes, including the Wada-Tika tribe.

The Wada-Tika tribe was named because of the small black seeds that members ate from plants in the marshy areas around the Malheur Lake in Oregon.

“The Wada-Tika tribe and their story is very unknown, and with it being Native American History month it is a great time to bring awareness to their story,” anthropology professor Kristina Casper-Denman said.

Volunteers for the U.S military stormed the camps of tribes all over the Great Basin, an area that covers parts of Nevada, California, Utah, Oregon and Idaho.

These invasions resulted in some deaths, which eventually caused the Bannock War.

This war lasted from June to September 1878. It was a turning point for the Indians in the Great Basin area, including the Wada-Tika tribe.

After the war, the Wada-Tika tribe was forcely removed from its reservation in January 1879.

All Indians in over 500 Paiutes were loaded up into wagons or forced to walk in the snow to Yakima, Washington. The ones who made the trip were freed after five years of being held captive.

Some of the Indians decided to stay in Yakima because the military took over their reservations as a camp for themselves.

In 1925, a Roman Catholic priest helped get the reservations back to the owner tribes. They built 20 houses along with other buildings but these houses were very crowded and which lead to having diseases.

Since the conditions were so bad after the Indians got their land back, they bought 771 acres and built additional housing so the conditions can improve.

The descendants of the Malheur Indians sued the government in 1956 for the loss of their reservation lands.

“To hear what (Stowell) said about (the Wada-Tika tribe) and the struggles they went through makes me want to learn more,” said ARC student JohnEva Lee. “This is a very interesting topic.”

Emily Thompson is a first-semester student on the Current and the co-editor of the Scene section. She is majoring in journalism and plans to transfer to the University of North Carolina.