American River College student Mahjabeen Zazai sits with the lesson plans she used when she taught English in her native country of Afghanistan. Zazai graduated from high school in Afghanistan at the age of 15. (Photo by John Ferrannini)

By Matthew Peirson and Cheyenne Drury

Six years after she was shot in a random attack by an unidentified gunman, American River College student Mahjabeen Zazai and her mother were moved in 2011 from Pakistan to the United States through the International Rescue Committee (IRC).

South Asia has been the site of armed conflicts for decades, leading many to flee to other parts of the world. Zazai is just one of the thousands who have been relocated to the U.S. through a resettlement agency.

“The reason I came is definitely safety, and I wanted to continue my education,” said Zazai.

Born in India to Afghan parents, she lived in Pakistan in the years preceding her relocation to the U.S. in 2011.

Zazai and her father were attacked and Zazai was shot in the leg in 2005 by an unidentified gunman as they walked up to a store where she frequently shopped while living in Pakistan. 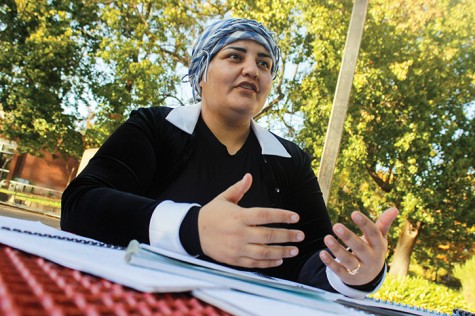 American River College student Mahjabeen Zazai sits with the lesson plans she used when she taught English in her native country of Afghanistan. Zazai said she has encountered some prejudice in America. (Photo by John Ferrannini)

“I was shot once … my leg was all wet and I went inside the store and I remember it being very hot and I remember I started feeling pain,” said Zazai. “The doctors told me I was lucky they were not going to cut off my leg.”

Zazai said the social stigma attached to disabled women in her country is drastic.

“Back home a lady without parts of the body… who will take care of that lady? No one will have her or let her work,” Zazai said.

Zazai graduated from high school when she was 15 years old and shortly afterward started teaching at a college through the IRC.

In 2006, Zazai and her immediate family were planning to move to the U.S., but it was Zazai’s idea to return to Afghanistan briefly to say goodbye to other family.

One night during that visit, Zazai’s father and his driver were in a car that was suddenly stopped by several men. The men ordered the driver to leave on foot, leaving Zazai’s father alone.

“(The) Taliban killed my dad because he was a businessman,” said Zazai. “He was well-educated; he was helping people.”

Zazai’s father was then shot several times in both of his legs, severely beaten and hanged.

“Still I blame myself for why we go visit family in Afghanistan,” Zazai said.

A group of his friends and Zazai’s family brought her father’s body to the house at 11 p.m. that night. Zazai said she sat with the body until 6 a.m.

Zazai said that she could see seven or eight bullet wounds in total on both of her father’s legs.

After taking the body to the hospital, Zazai said doctors gave the body an injection. When it had no effect, her father was officially pronounced dead.

“The person who all the time encourages me was gone,” said Zazai.

Shortly after her father’s death, Zazai’s sister was attacked by three armed men as she was walking to her job at the airport.

“I think maybe because she (was going to) work … that’s why they hit her (with) their car,” said Zazai. “Three gunmen came out of the car to attack, but airport security interfered.”

The attack left her sister wheelchair-bound for 12 days.

Zazai said that when these types of incidents occur, if the pursued person (in this instance, her father) is dead, they will attack the person’s children.

As a result, Zazai was targeted for her education and ability to teach others, which led her to fear for her safety.

From 2007 to 2011, Zazai was practically isolated inside her own home.

“My sister told me ‘You’re going to stay in the house,’ ” said Zazai.

After spending nearly half a decade inside of her family’s home, Zazai and her mother were relocated to Sacramento.

Zazai said that when she came to the United States, she chose Sacramento because she doesn’t like the snow. She didn’t know at the time that she had chosen one of the most racially diverse cities in California.

Zazai described her first years in the U.S. as “uncomfortable” and “alien.”

“At the beginning when I came … I didn’t feel comfortable,” said Zazai. “I didn’t have any support from my brothers or anyone… they wanted me to experience things on my own. They said ‘she can do it … but she’s afraid.’ ”

Zazai decided to go to community college to catch up on credits she earned in Pakistan that do not transfer to American colleges. Her official transcripts were lost in a fire.

Zazai has struggled with more than just feeling uncomfortable being placed next to men in her classes at ARC, having encountered prejudice at local stores.

“When I see my head dresses in my closet, I look away. I don’t want to wear them,” Zazai said. “Still, I keep it there because I don’t want to forget that part of my life.”

Zazai said she has dealt with feelings of guilt and helplessness for not being able to assist her sister and nieces back home.

“Sometimes I feel like I am not a good aunt … I tried two times to get them over here,” said Zazai. “My sister’s husband is a famous politician of Afghanistan … he’s been attacked three times and I fear for them all.

Zazai said that her sister has been unable to obtain a visa to get her into the U.S., though Zazai doesn’t blame the U.S. for not issuing one.

An Arabic church in Sacramento issued an invitation to Zazai’s sister, saying that she would receive a visa after being a part of the church for three months.

The U.S. embassy denied the request, however, as it assumed Zazai’s sister had no intention of returning to Pakistan.

Regarding the Afghan community in Sacramento, Zazai explained that a lot of them do not want to talk because they fear for their families back home.

“A lot of refugees from Afghanistan don’t want to talk … they say we have family back home, something will happen to them,” said Zazai. “As an educated woman I should speak up and obviously (the) U.S. can’t bring all Afghans to U.S. and not all Afghans want to come but people who want to visit or want education … should at least (be issued) a visa.”

In light of all of the difficulty and pain that Zazai has touched on, she also talked about her religion and the questions she would like answered.

“(People) ignore me because of my scarf, but I’m not a terrorist,” said Zazai. “I love all people.”

Zazai said she that only hopes for the continued improvement of people’s lives.

“I am Muslim and I pray five times a day and I go to (the) mosque and I take my mom also,” said Zazai. “They are happy there … no discrimination. Why are they not happy outside of mosque?

“I do not just pray for (the) Muslim community. I pray for all people,” said Zazai. “I ask … send angels and collect the guns.”

Be the first to comment on "Faces of war: Mahjabeen Zazai"