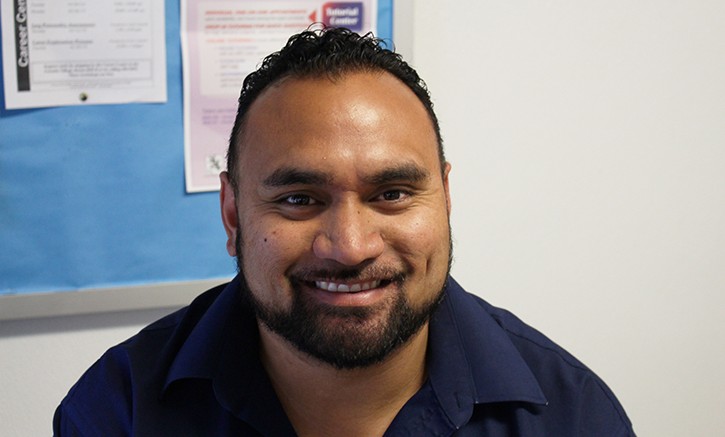 After graduating from ARC and transferring to Sacramento State, where he got his bachelor’s degree in psychology, Veteran's Resource Center employee Dan Avegalio returned to ARC to work at the new VRC. According to his coworkers and those he's assisted, as a veteran himself, Avegalio brings a relatability to the program that helps students reentering civilian life to adjust. (Photo by Barbara Harvey)

Just one month after his discharge from the Marine Corps, 30-year-old Daniel Avegalio began his college career by enrolling at American River College in the fall of 2009.

Avegalio, who was deployed three times to Iraq, found himself in a situation similar to many recently-discharged servicemembers who come to college: the long, hard, adjustment back to civilian life, compounded by the lack of cohesive veteran’s services on campus, frustrated him.

“It was a rough time being deployed all the time, and transitioning to life back home was really difficult for me,” Avegalio said.

“In the Fall of ’09, (the government) had just started the post-9/11 GI bill,” Avegalio said, referring to the expansive Veterans Affairs-administered educational benefits package for veterans who have served since Sept. 11, 2001. “That increased the amount of veterans coming back by a couple hundred in that fall alone.”

When Avegalio came to ARC for the first time, the award-winning Veterans Resource Center that ARC boasts today was just an idea. Services for student veterans were scattered across the campus and the various offices were understaffed.

“We didn’t have the Veterans Resource Center when I was here. I wish they did. … Services were all over the place. We didn’t really have services in place to help them. Not only do you have to deal with school problems, counselors, financial aid, and all that, you also have to deal with the VA process, which is a lot more paperwork on top of that. And there’s no one to point (veterans) in the right direction.

“There was a frustration, not having anyone to relate to, and not getting clear answers anywhere on campus.”

After graduating from ARC and transferring to Sacramento State, where he got his bachelor’s degree in psychology, Avegalio returned to ARC to work at the new Veterans Resource Center on campus.

“It’s critical to feel support while they’re transitioning back. We felt unsupported when I was going here, and a lot of us wanted to quit. Some of them do quit because there’s not enough support on campus,” Avegalio said. “That’s why I got into this job. I was looking for ways to give back and help out other veterans, and then I got into counseling.”

At a recent ARC-hosted event, many of the largest community colleges in California came to learn the best practices of the VRC from Avegalio, who coworker Amanda Carroll told attendees has been transformational to the program.

Perhaps because of the wealth of services and support, ARC is home to one of the largest veteran student communities in California, with 1,500 enrolled students in 2015—translating to 4 percent of the entire student population.

Avegalio’s coworkers, as well as students at the VRC, said that as a veteran himself, Avegalio brings an understanding and relatability to the program that is a relief for veterans during the difficult transition back to civilian life.

Opinion: Save the women, not the “tatas”

Be the first to comment on "Faces of war: Dan Avegalio"